Alaska trout trends say this could be a big year for stocks :)

You may recall a couple weeks back when I mentioned that I’d be away for a few days doing some market research --- I’ll share my findings at the end.

A few years ago I shared my experience with my (and now Judy’s) dear friend Matt Morrill, an enlightened Montana fly fishing guide whom I met by happenstance as the one-year window to re-book a cancelled airline ticket was about to close. I found myself in Yellowstone National Park, unexpectedly inspired by a true master, not only of his craft, but of how to live. If you’re new to the blog, you might enjoy God’s Greatest Work.

Over the years I’ve had the pleasure of having fished with many a guide --- most of them adept at what they’re paid to do --- but up until this past week, other than that first experience with Matt, I have not found myself plunked at my desk immediately upon returning home writing about anything deeper than maybe analogizing a jeep trail to investing in the stock market. Well, here I am.

There’s this guy in Kenai, Alaska, named Ben Hulbert. Ben, like Matt, is a fishing guide, and Ben, like Matt, never asked what I did for a living (I.e., his interest lied solely in the moment), and Ben, like Matt, has the utmost respect for the surroundings that allow him, at the tender age of 30, to earn his living amid nature’s breathtaking beauty.

We --- Ben, my wife Judy, and I --- recently spent two amazing days adrift glacial green waters as they flowed their way to the ocean via the great Kenai River.

Shortly after shaking hands with our young tutor for the first time I whispered to Judy "I like Ben" as she and I entered the service station mini mart where we initially rendezvoused --- Ben insisted that we grab our coffee, etc. while he transferred the gear from pickup truck to drift boat. With slightly bent brows and through a puzzled half-smile she said "really? we just met him." "Yeah, but I got a good feeling. The kid’s really comfortable in his own skin.” Soon thereafter, Judy shared that sentiment completely.

Ben’s boat will never smell of organic bait; he calls his business "Kenai on the Fly", as in "fly fishing". At one point during the second day’s drift he noticed a small concentration of fishing boats motoring through a stretch of river. He promptly equipped a fly line with a dark-red colored bead that would emulate the salmon eggs he knew these gents were spilling onto the river floor --- and into the mouths of the gorging rainbows that follow their seafaring cousins to their spawning beds. He explained his tactic with some chagrin; the fishermen douse the eggs in all manner of chemicals (to give them color and, I presume, stickiness) that are ultimately toxic to the wild trout that Ben hopes to help his clients outwit, net, and gently release. He briefly mentioned the regulatory regime he operates under and compared the bait fishermen’s freedom to slowly poison the trout to some entirety senseless regulation. Honestly, I was so eager to put his ingenious plan to work --- to get that artificial fish egg that imitates a modified fish egg into the water --- that I didn’t quite catch the details of that particular senseless regulation.

I could, at this point, as I often do, dive into the ills of government intervention. Like when the Federal government instituted a program to subsidize Alaska fishing guides during a recession, while Ben’s business grew by 20%. Which, in essence, impedes the market process that uses economic slowdowns to separate good businesses from bad, leaving industries to emerge better, more efficient, and delivering higher than ever before quality to their customers, but I won’t.

To cut to the chase, yes, this is a commercial for Ben. He’s an absolute joy of a young man who happens to be far wiser than his years. If you ever find your way to Kenai Alaska, and would like to try your hand at fly fishing (he’ll get you quickly to the basics if you’ve no experience) for wild trout (and/or silver salmon if you insist), I promise you, Ben is your man! Go to  http://www.kenaionthefly.com/

As for my research into the correlation between the feeding habits of Alaskan trout and volatility in the stock market, well, this could be a big year! :) 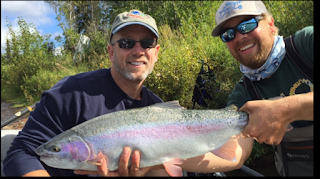 Posted by Marty Mazorra at 9:41 AM