This Week's Message: Good traders and good investors have more in common than you think...

In Tuesday's video we took a look at that day's pummeling of the sectors we favor:     click any chart to enlarge

Ugh! All things cyclical took a bath, while the defensive stocks (the stocks you buy when nobody's buying cars and computers) fared just fine.

So, clearly, the market was signaling that all's not as it may appear. Right? Well, yeah, you'd have to conclude that if the stocks of companies that benefit from a growing economy, higher interest rates, a little inflation, etc., are getting creamed, we maybe have issues. Now, of course one day's action does not a trend make. However, when we're talking a 3% hit to the sector, financials, that stands to perhaps benefit the most from higher rates, etc., we simply can't ignore it. Or can we?

Here's the action since Tuesday:

Hmm... Financials go from the gutter one day to the balcony the next. Not to mention the marked reversals in materials, tech and industrials -- and the plunge from the top to the bottom by the defensive utilities and staples sectors.

Well, then, I guess we must conclude that if the stocks that benefit from a growing economy, etc., are outperforming the pack, maybe we're in pretty good shape after all. Now of course two days' action does not a trend make. However..... well, there's no "however" when we're talking one or two days (or weeks, for that matter), regardless of the magnitude of the move.

You see, in the very short-term, market prices are dictated by traders, many of whom trade literally by the second and, therefore, pay literally zero attention to the fundamentals. The successful ones trade tick-by-tick price trends, which, frankly, makes perfect sense, a la Newton's Law.

Ironically, while we may think that successful short-term traders are unique in their approach, they're uniqueness lies only in the dimension of time. Successful traders, be they short or long-term, and successful investors (long-term) do essentially the same thing -- they follow trends. Of course the very short-term trader must focus solely on price, while the long-term investor has the luxury to focus on trends in the economy, in company fundamentals and, the really good ones anyway, in longer-term price movements.

Take a guess at the time frame illustrated in the chart below:

Clearly, these two different time frames tell similar stories. In both instances prices broke below a sideways pattern, then bottomed, then rallied, then consolidated a while before moving into a new uptrend. Savvy players (trend followers) no doubt heeded those trend changes in both instances and acted accordingly.

The second chart covered the daily price movements that occurred from March 2007 through April 2011.

And what about the first chart? Let's extend it a bit as well:

So both periods are notably similar -- no doubt inspiring similar moves among trend-following traders. The thing is, while the second chart covered the daily price movements over a period of 4 years, the first one (the one now directly above [and directly below]) covered merely the one-minute price movements over the last 4 days: 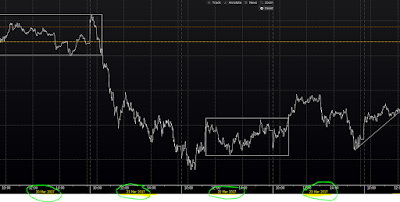 4 days that are captured just inside the top of the tiny green circle on the 5-year daily chart below:

Yes, short-term traders absolutely move markets on a short-term basis. They, for example, see a top forming in financials, a loss of momentum, a break below prior support and they aggressively sell -- forcing the sector down by some 3% -- leaving the world's worriers to ponder what went wrong; to rethink their theses and to fret over whether they're on the right side of the market. Only to breathe a collective sigh of relief when the next-day's traders see a bottom forming, upside momentum building, a break above prior resistance and buy like mad, forcing prices up and vindicating those who just knew financials were the place to be. Or, alas, horrifying those who mistook the previous day's selloff as a signal to abandon ship.

The funny/sad thing is, the fretting, the relief, and the horror was, save for the horror, utterly unnecessary; for the action had virtually nothing to do with the efficacy of holding financials when the economy's improving and valuations are compelling. It was simply short-term players playing extremely short-term price trends.

Therefore, being long-term asset managers -- cognizant of the fractal nature of markets -- we'll keep our focus on longer-term trends. While, in the meantime, helping you keep the short-term trends in their proper perspective...