Last week I challenged (by parsing some data) one economist's assertion that stocks were doomed and bonds and gold would be the best places in which to hunker down. Looks like Ms. Pomboy has company -- at least with regard to gold:

My interest in gold at the moment is not in whether it'd be a viable long position in client portfolios (being that it technically remains in a down trend), but in its inherent qualities as an economic barometer.

Gold bulls couldn't have asked for more than the events of late last week. Missiles firing and jobs missing estimates you'd think would send the yellow metal (the safe haven it's presumed to be) into the stratosphere. And, yes, the minute I heard the Syria news Thursday evening I checked gold and it was up like fifteen bucks an ounce. Then, bright and early Friday morning, the news that the U.S. created a paltry 98,000 jobs versus the 180,000 economists expected, and, yep, gold spiked again. Here's a look:     click to enlarge... 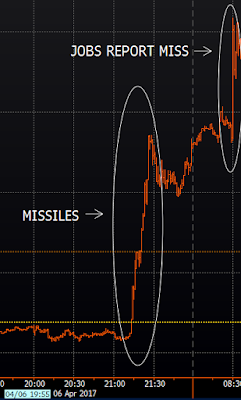 Now, I get where the economist and the major financial journal are coming from, but to do this right we can't simply accept that 1 (missiles firing) and 1 (jobs miss) and 1 (stocks expensive [per last week's message]) = 3. The math seldom works when it comes to markets. The 1's we could add to the equation are virtually infinite.

For example; we could add: and 1 (jobs have missed estimates in 6 of the last 8 March employment reports):

And a very critical "1" we might add would be the all-telling price action of gold. We can talk all day about missiles, missed estimates, political mistakes or whatever, but at the end of that day, the price itself will tell us what the market really thinks.

Now, back to the stratosphere, here's Friday's gold action illustrated on a candle stick:

What you see there is what technicians call a "shooting star". The body of the candle (in this case near the bottom) illustrates the price at the open and the price at the close. Being hollow means that it was an up day for gold: The bottom of the body represents the opening price, the top represents the close. Now notice the very long line shooting up from the body -- that's called the wick. The wicks of a candle (above and below) give us the day's trading range.

I referred to this line as "shooting up",,,, well, actually, it represents the price (the top of the wick) where gold bears (sellers) shot the price down - big time!

If we take a look at Friday's basic line chart we'll see that gold was up on the day, and we might think to ourselves sure, that make sense given all that's going on. But we'd be missing a perhaps critical message that says the market is anything but convinced that gold will soon ascend to new heights.

Here I'll lay the line chart for gold on top of the candles and you'll see what I mean: 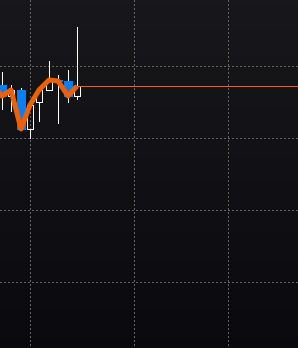 Nothing on the line chart even hints to Gold's actual trading range on Friday. Clearly,
a lot more went on than meets the untrained eye.

Here's a look at the entire day's trading:

Not -- in the extreme short-term -- the bullish gold action (nor the bearish economic signal) the economist and Barron's foresee.

Lastly, and tellingly (for the moment), the chart below shows gold losing it -- for the fourth time in a month and a half -- right at its downward-sloping 200-day moving average.

That would be a bearish technical signal for gold, and perhaps a bullish signal for the economy.

Once again, this is not me making a prediction on the future price of gold, nor, for that matter, the direction of the economy: This is you and me digging below the headlines to ensure that we maintain the most data-informed view on market probabilities going forward.

I'll follow up when I get a chance with the bond market's interesting reaction to last week's events.