Charts of the Day: French Election Exit Polling and the Euro

Two weeks ago, herein, we focused a bit on round 1 of France's presidential election. In our view (totally based on the polls and the odds makers), the election was essentially decided in the first round. Any divergence from the trend in polling and/or in the odds would've inspired additional commentary from me.

The markets with the highest sensitivity to global events are forever the currency and the credit markets. Last week we touched on CDS spreads (I mentioned the French election as well as the Euro Zone economy as factors influencing a decline in those spreads), and on the dollar's initial reaction to the better than expected April U.S. jobs number.

The headlines as I type say that the exit polls have market-favorite Macron becoming France's next president.

Here's the Euro's reaction vs the dollar:

So should we expect a rally in stocks, the likes of which we saw during the two days following round 1? 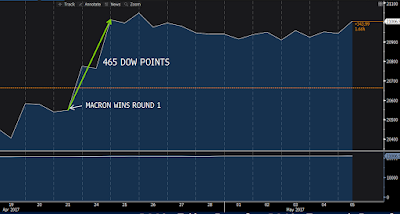 I mean, the euro looks to maybe (today's move could simply be a knee-jerk, given that the outcome was all but already decided) be rallying like it did then:

Well, we'll see. But I suspect that the market (traders en masse), like us, figured round 1 told the story. Which means that had Macron lost, probabilities would've had the market selling off come tomorrow morning. Not that it won't sell off (or rally for that matter) mind you, it just won't be because of the French election (although the media will report it as the excuse should we see a rally).