Tillerson, Gold and The Dollar

The strong setup for stocks -- that we've been illustrating herein since last summer -- remains, and appears to be allowing for a surprising sanguineness among the major averages when it comes to the, let's call it, angst, in Washington. Although it does appear to be playing havoc with a couple of other markets: Specifically currency and gold.


A week of, on balance, quite good economic news -- most tellingly the highly optimistic Institute for Supply Management Manufacturing and Services Surveys -- culminated Thursday in heightened odds of a December rate hike, a rising dollar and a declining gold price: 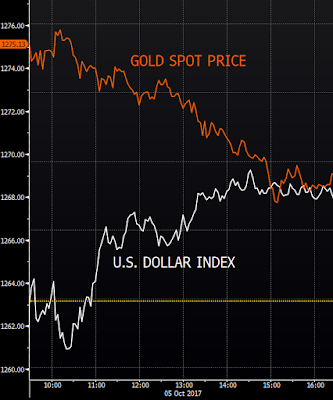 This morning we woke to a September jobs report that featured wage data that evoked the term "wage-push inflation". Note the reaction: 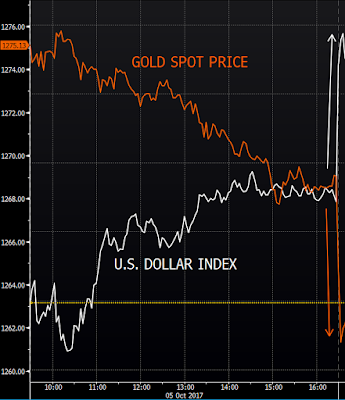 But then the name Tillerson, which saw a surge in headline-number yesterday, about where you see the dollar begin to rollover and gold flatten out above, showed up today in multiple commentaries predicting his ouster, and even naming a likely successor.

Take a look at the action during the balance of today: 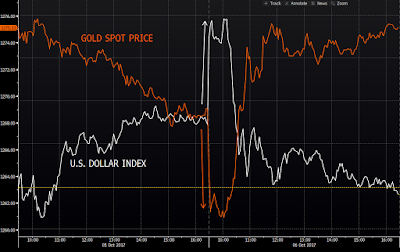 Like the man or not, I think most of us would agree that Tillerson has been publicly (apparently less so privately) a calm, confident, reassuring voice amid some truly nerve-racking geopolitical stuff. And he's considered a close confidant of a few other such voices presently employed by the Administration.

Again, while jumpier markets -- currency and gold in particular -- seem to be taking notice (of course there may be other factors at play as well), the stock market (closing near the flatline today) seems to be taking the apparent strife in stride. At least for the moment...

Posted by Marty Mazorra at 5:07 PM