This Week's Message: A strong finish is in the historical cards, but there's this issue...

History favors the odds of a strong 6 weeks to come, particularly in that this is an election year. 2018, however, has an issue coming to a head that can -- good or bad -- make its year-end one to remember... 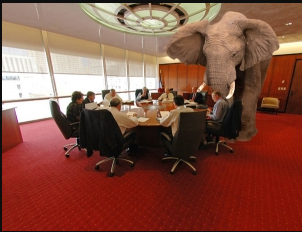 Save for communications, and despite Friday's ugly session, every major sector made up some technical ground last week, which makes sense given the unsurprising mid-term election results and the -- until yesterday -- somewhat friendlier rhetoric around foreign trade.

If you followed, and, worse yet, believed the financial headlines over the course of Friday's trading session you might've gone from feeling concern over a heating economy (the producer price index [reported 5:30 a.m. pt] was way hotter than economists expected) and, therefore, Fed rate hikes galore, to, by the afternoon, all out angst over a weakening global economy, as that then became the reason du jour.

Frankly, in my view, both narratives essentially focus on the cart, while ignoring the elephant-sized horse pulling it along.

While I'm certainly not the only observer who sees the present core issue as being the U.S./China trade dispute, for whatever reason it pretty much remains, again, the elephant in the room that folks who should know better seem content to tiptoe around. And as my metaphors suggest, if indeed inflation and global growth are legitimate worries (they indeed are), well, you might imagine how a protracted trade war can only make matters worse. Much worse!

Of course his statements exacerbated an already weak trading session.

I think Peter's a bit peeved at a market that he clearly does not understand. Here's me quoting him, and exposing his naiveté, in my March 20th blog post:


“I don’t think there’s anybody on Wall Street that will oppose cracking down on China’s theft of our intellectual property.”

Honestly, I agree with the sentiment of his March statement; let's crack down on intellectual property theft, but let's not do it by implementing an asinine (tariff) scheme that history has proven over and over again hurts the U.S. economy at every conceivable rung!

As for Friday's outbursts, well, okay, the China deal will be on the President's, not Wall Street's, terms, but make no mistake my dear friends, Wall Street will judge it based on what it portends for the economy. And as we've learned over the years, nothing can lay waste to a political career like a weak economy and a bear market in stocks.

And as for the political football term "globalist", which by some miracle gains negative traction in this great melting pot of the world, well, when you consider that so many iconic U.S. companies generate better than half of their revenue from outside our borders -- i.e., from where the remaining 96% of our human family lives -- it's probably not a term/concept we should be at all railing against.

Here's a video we shot back in July of 2016 that we'd like all of our clients to watch (again) -- part one (3 minutes) in particular. Virtually all of the return, valuation, etc., comparisons that I illustrated in part 2 are as, if not more, pertinent today than they were 2+ years ago.

Once playing, click the icon in the lower right corner for full screen. Focus should occur after a few seconds; if not, click the wheel to the left of the YouTube icon to adjust:

Posted by Marty Mazorra at 8:11 AM