This Week's Message: All We Can Be Certain Of, For the Time Being

Question: Which of the following two hypothetical headlines would make you feel better about the present state of the U.S. stock market?

1. Roaring economic prospects just sent the U.S. stock market to its best week of the year!

2. Waning economic prospects just sent the U.S. stock market to its best week of the year!

Of course your answer would be #1. However, alas, the headline that explains last week's rally would be #2 -- as the presently waning economy (confirmed by last week's disappointing jobs reports) means that the Fed may be cutting interest rates sooner than later, and stocks typically love rate cuts.

My what a difference a month can make!

Here's where fed funds futures placed odds of future rate cuts as of May 7th: 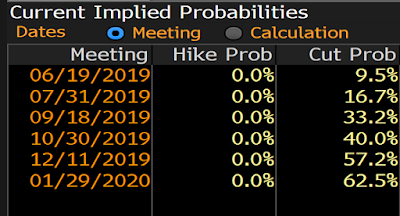 Here's the odds as of yesterday:

But here's the thing, while odds of future rate cuts were indeed trending higher already, those of a near-term cut exploded upwards when the President promised to hit U.S. importers with a 5% tax (tariff) on everything they bring in from Mexico.

Here's the day after:

Yes, my friends, it's the trade war that's troubling the economy!

Question now being, with Mexico tariffs off the table (per yesterday's 180), will the market (traders in the aggregate) be as certain of a Fed cut, come, say, July? And, frankly, was the market justified in its assumption to begin with?

With regard to the latter, Bespoke Investment Group says not-so-fast!  emphasis mine...
So while absolutely the rally could continue right into Monday morning and trap more short-selling bears -- forcing them to cover (further exacerbating the up move) -- last week's upswing by itself, given what inspired it, hasn't inspired me to put new capital to work in any big way just yet.

Plus, the technicals, while improved, are a long way from signaling the all-clear:

And here's our weekly chart from back to the beginning of the present bull market:

Bottom line: For the time being, all we can be certain of is heightened volatility -- in both directions.