Morning Note: Not Time to Get Greedy, but...

Stocks were rallying notably in the pre-market ahead of this morning's CPI number. But, as I suggested in yesterday's video (one to watch if you haven't yet), we did not expect a market-friendly read out of September's inflation numbers... The way certain components are measured, along with base effects, simply didn't offer much hope of a downside (upside for stocks) surprise.

Well, that's what's playing out in the premarket this morning... Which is a virtual replay of last month's action... Stocks rallying into the number (although news out of the UK was globally bullish this morning), then tanking on the disappointing CPI release.

Now, make no mistake, there's information in that market action... I.e., despite the sour sentiment, there's some serious nervousness around missing a market upside pop should the slightest catalyst emerge...

Fascinating, at least at the moment, that the volatility index (VIX) is actually trading lower as I type... In a panicky selloff, you'd expect the VIX to be soaring as options traders pile into downside bets... The opposite appears to be occurring (but only for the moment, mind you)...

As we've reported -- while we've maintained that there's yet more downside to plumb for the current bear market -- the technicals have been constructive, and fear remains high, which is the recipe for some violent bear market rallies... I suspect that's what has traders hesitating to load up on downside derivative bets (again, mind you, only for the moment).

On another note, per the second line in the snip below, Janet Yellen's getting concerned: 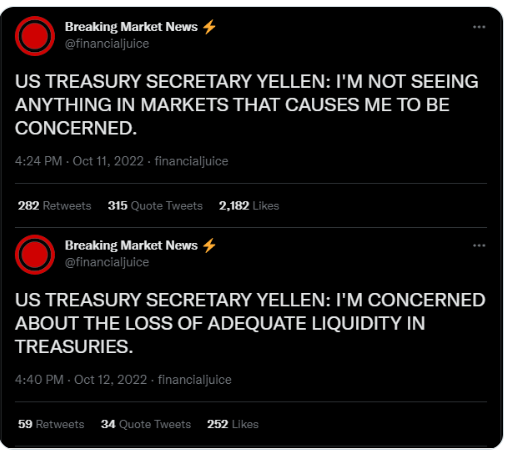 So, what's the worry? Well, a lack of liquidity essentially denotes a lack of interest, or a lack of  buyers... In an illiquid market/security, should a disruption occur that incites a panic or rapid selloff, the price of said security can utterly plummet in value, and, in the case of bonds, send yields to the moon.

Case in point, the earthquake in gilts (UK government bonds) last week, that, had the Bank of England not intervened (bought like crazy), it appears as though margin-call-disaster would've hit the UK pension industry.

Two of the components within our own financial stress index are the Treasury Liquidity Index and the MOVE Index (tracks implied volatility on treasury options)... In both cases, a rising line ain't good.

To get a sense of how quickly things can move (as stresses emerge and concerns mount), note the dates (10/11 and 10/12) in the Treasury Secretary's two statements above.
Make no mistake, their tough talk aside, the above dynamic has the Fed's attention.
Asian equities struggled yet again overnight, with 13 of the 16 markets we track closing lower.

Same for Europe so far this morning, with all but 2 of the bourses we follow trading down as I type.

Among our 35 core positions (excluding options hedges, cash and short-term bond ETF), 0 (save for put options) are in the green so far this morning. The losers are being led lower by Albemarle, MP Materials, AMD, base metals miners and cyber security stocks.


Not saying it's time to get greedy right here, but of course we're getting closer by the day:

"...be greedy when others are fearful"

Posted by Marty Mazorra at 6:44 AM