No doubt some folks believe that we're on the verge of the proverbial going to hell in a hand basket and that the market is on the verge of collapse -- which are perpetually the beliefs of some of those folks (which is a good thing, as buyers need sellers) -- and of course stock prices are forever subject to whipsaws and draw downs (even/always during strong bull markets). But to the extent that the market is a discounting mechanism, as described below, its present intermediate and longer-term trends (chart below) do not support the fears of those perpetually fearful folks.

The following from John J. Murphy's great book Technical Analysis of Financial Markets speaks to the inherent risk in overthinking the market.


...market price acts as a leading indicator of the fundamentals or the conventional wisdom of the moment. While the known fundamentals have already been discounted and are already “in the market,” prices are now reacting to the unknown fundamentals. Some of the most dramatic bull and bear markets in history have begun with little or no perceived change in the fundamentals. By the time those changes became known, the new trend was well underway. 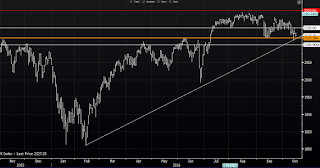 Posted by Marty Mazorra at 1:00 PM