Chart of the Day: China Risk

To the dismay of those who've been betting big that China's gotten too far out over its skis, its economy remains unwilling to buckle under the weight of a rapidly expanding credit system.

On several occasions herein (here's one) we've touched on the importance of tracking Credit Default Swap spreads as measures of potential stress in the global financial system. Well, the cost of protecting one's Chinese debt exposure recently hit a four-year low. Strongly suggesting that a hard landing in the world's second largest economy remains unlikely for the foreseeable future: 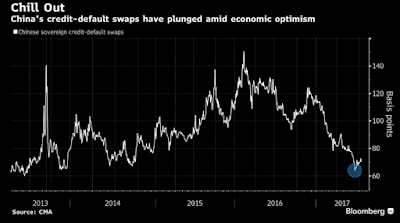 Posted by Marty Mazorra at 6:21 PM