Charts of the Day: Small businesses are getting a little impatient with Washington...

While the factors that underpin the continuing bullish setup for stocks can be debated, the one area where I have found last year's election to have been unambiguously positive is the NFIB's monthly small business survey (aka Small Business Optimism Index).

We've noted herein that the top 2 concerns respondents have consistently cited for most of the past decade have been taxes and government red tape. President Trump's promise to tackle both had clearly inspired small business owners across the country.

While the accomplishments, or lack thereof, of the still nascent administration are hotly argued, it appears that small business owners need to see some legitimate movement in the areas that worry them the most. Red tape has moved back into the number 2 worry spot:


This month’s increase in the percentage of respondents citing Government Red Tape as their number one problem is noteworthy due to the fact that it is the largest m/m increase on record. Obviously, delays in Washington on reforming health care and reigning in regulations is weighing on sentiment. Prior to this month, the two largest m/m increases in the “problem” of red tape were in January 2009 (Obama Inauguration) and April 2010 (the month after the Affordable Care Act was signed into law). 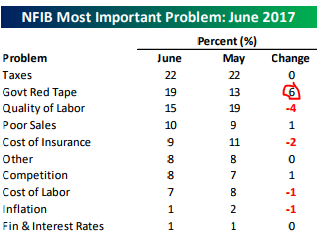 Here's the above graph through last Friday:

All that said -- while we need to respect, and monitor, the recent negative trend -- the overall reading is still notably optimistic.