Mnuchin and Lighthizer are heading to Beijing next week to promote the appearance that efforts are underway to ultimately end the trade war. The best they can come back with is a commitment from China to begin buying more U.S. ag products, but they’ll (assuming they can) have to give in a bit on the Huawei ban to make that happen.

Clearly, neither side is anxious to do more than what it takes to keep their respective markets hoping, and, therefore, holding up into next year. As for the U.S., the deal they had in the bag a few months ago is gone, so there’ll have to be a marked pullback in its demands of China, and – in terms of political distraction and election timing – that’s not a place they want to go at this juncture. As for China, the optics at home have changed dramatically; they’ve told their people that they’ll not give in to bullying form the West, and that any deal will be fair and equally beneficial to both parties, so it’s going to take awhile. In the meantime China expects that the Administration will continue to receive huge push-back from U.S. businesses, and that the ill-effects of tariffs will continue to weigh on the U.S. economy. I.e., the longer this goes on, the better the Chinese believe it’ll be for them.

As for the immediate term, stocks are holding up okay this week on favorable earnings reports, spotty economic data (validating the perceived need for a rate cut next Wednesday), and the expectation that the European Central Bank is going to announce an aggressive easing campaign tomorrow. 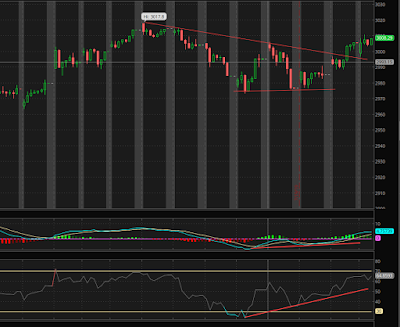 Posted by Marty Mazorra at 9:40 AM