Morning Note: Bottlenecks Do Inspire Investment -- And -- Are We Paying Attention?

Keeping this morning's note brief, as Friday's are when we dig into the latest economic data (weekly update to follow), I wanted to just touch on the ongoing challenges around production bottlenecks -- as they're a real issue with regard to the near-term inflation trend.

As we're learning, China lockdowns aren't seeming to quell the latest Covid strain (uber contagious) as they had the previous ones. Nevertheless, China placed two important manufacturing hubs in total lockdown this past week. Such news, of course, means, well, bottlenecks.

That said, given that China is now in full-on attack mode with regard to boosting its economy, and markets (Xi is up for reappointment this year), leadership has announced that they're seriously re-thinking that zero-tolerance Covid policy.

Two of the five Fed regional manufacturing indices are in for the month, and, alas, per the below from Bespoke Investment Group, delivery times are at record levels: 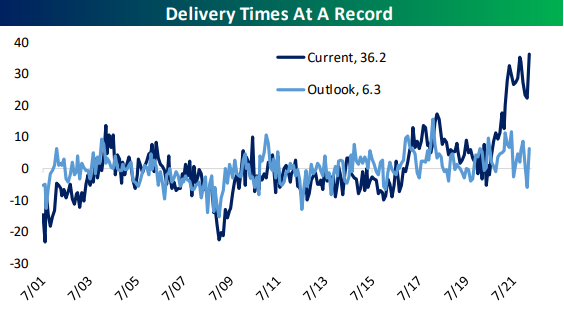 As Bespoke also pointed out in their yesterday afternoon note, however,

"On the positive side, all of this supply chain stress is likely playing a role in the very strong capex intentions reported in the Empire and Philly Fed data."

Those "strong capex intentions" reported in the latest surveys indeed jibe with what we're seeing in our capex study (a component of our proprietary index):

Asian equities leaned green overnight, with 11 of the 16 markets we track closing higher.

Europe's struggling this morning, with 16 of the 19 bourses we follow trading lower as I type.

Among our 38 core positions (excluding cash and short-term bond ETF), 17 -- MP (rare earth miner), AMD (chip maker), ALB (lithium miner), solar stocks and Asia-Pac equities -- are in the green so far this morning. The losers are being led lower by wind stocks, bank stocks, German equities, PARA (formerly Viacom) and Nokia.
As we continue to preach, the dynamics that drove society (and markets) these past many decades are, if we're paying attention, changing before our very eyes:

"We stand at the end of the era that began with the Cold War. It’ll be less like the messiness of the early 2000s or the raw potential of the 1950s, and more a disastrous combination of the battle royales and displacements of the 1870s against the economic backdrop of the 1930s. It. Will. Suck.

A mad scramble for the scraps of the era just ending. Compared with the safety and wealth of the past several decades, it may seem like the literal end of the world. But the end of an era isn’t the same as the end of history. Something new is coming. Something that, historically speaking, is far more “normal” than anything the Americans created. Just keep in mind that “normal” is far from synonymous with “comfortable,” much less “favorable.”

Have a great day!
Marty
Posted by Marty Mazorra at 7:33 AM