What the &$#! Happened Yesterday? 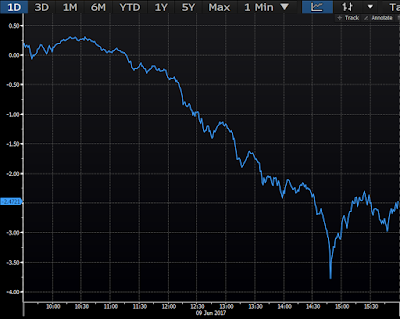 Of course we gotta know why!


Accounts of what spurred it ranged from bearish tweets by a short seller to a cautious note from Goldman Sachs Group Inc.

I could cut and paste the tweets and paraphrase Goldman's note for you (haven't read either by the way), but why? All that'll give us are the views of folks who somehow benefit from advertising their views. The folks whose views we really want wouldn't dream of sharing -- as it could severely undermine their efforts to profit from them.

Ah, but we do have a way of ferreting out the latter's thinking; it's expressed in the manner in which they push asset prices across the charts.

As you can see above, about an hour in sellers showed up in force, and stayed in command for the next four hours. Then, out of the blue, buyers emerged (no doubt some converts in that group) and turned what had been a 3.75% one-day route into, well, a 2.3% one-day route.

Here's the same chart with volume added. Note my circles at the top 3 volume spikes. That first huge spike was all about wholesale selling of tech stocks. The second was clearly a rush to buy roughly an hour and 15 minutes before the close. The last was your typical day's-end closing of short-term positions, but it appeared to be on an uptick (i.e., plenty of opportunistic buyers willing to hold stocks into the weekend). 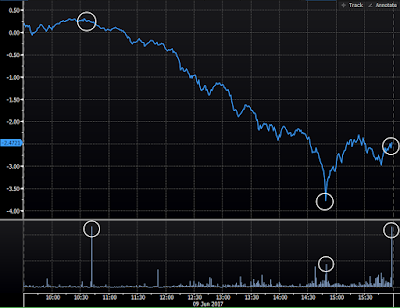 So -- the late-day buying notwithstanding -- should we read more into yesterday's tech stock drubbing? I mean, does it suggest anything dire in terms of the economy or business prospects going forward? Well, certainly not if it was simply about an individual's tweet and the commentary of a Wall Street firm not known for its foresight. But let's ask the market.

If it's economic worry, we'd typically see it in bond yields (lower). And while the notable spike in the 10-year at the open dissipated a bit until, ironically, about the same time money rushed in to buy tech stocks, it ended higher on the day:

Plus, as I've been reporting this year, if today's gold price is mostly a reflection of global fear, or lack thereof, surely it'd be spiking if the economy's the worry. Well, it turned out to be a virtual mirror image of the 10-year yield (i.e., no worries with regard to the price of gold -- at least not on Friday): 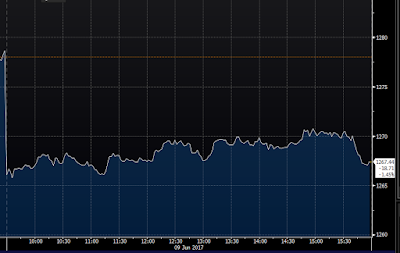 So if -- as the action in bonds and gold portend -- traders weren't spooked by some macro development, what did they do with all of the profits they stole from the tech sector (it's up huge on the year)? Well, it appears as though -- at least the past few days -- those lately neglected U.S. financial stocks (that btw we here remain quite bullish on) are attracting their attention (especially on Friday).

Here's a 3-day look at financials:

Now, before we begin celebrating Friday's late-day bounce in tech and the apparent rise of financials, I'll bring us down to earth with my opening to this week's message:


I need to preface the following with the acknowledgement that, as with virtually everything else in life, future market prices are undeniably uncertain. Stocks can fall out of bed at anytime for any reason -- whether they've enjoyed an uptrend lasting 8 years, 8 months, 8 weeks, 8 days or 8 minutes.