From our weekly message posted Monday:

The thing about the U.S.'s protectionist ambitions is that they're being imposed on virtually all of our major trading partners at the very same time. In essence, we are doing "battle" with a number of armies, none of whom are battling among themselves. In fact, our recent actions are sowing a newfound kinship among our now trade adversaries and a great deal of global deal making (that excludes us) in the process.

From Bloomberg this morning (note the absence of USA on the map below):

The EU has more than a dozen trade negotiations in varying states of completion and the bloc’s trade commissioner, Cecilia Malmstrom, is kicking off talks this week in Australia and New Zealand. All the deals being conducted are sending a message that "the EU and its partners are coming together," Malmstrom said in Canberra. 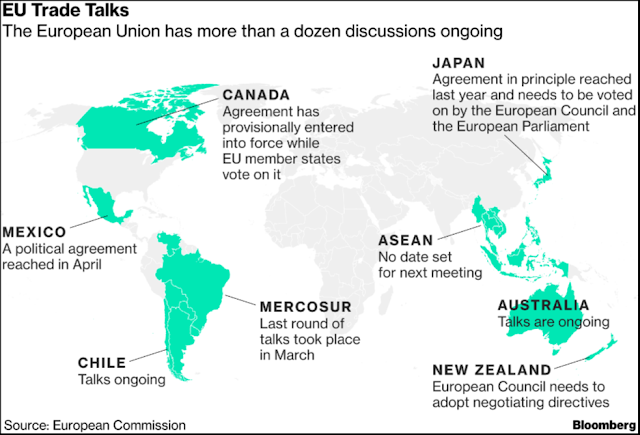 Make no mistake, this is a sea change in terms of the U.S.'s traditional positioning in the global marketplace. Whether or not this is a good thing is I suppose open for debate. Of course you know our position...
Posted by Marty Mazorra at 9:47 AM