People Have to Have a Reason, And the Media's Forever Willing to Accommodate -- AND -- Our Present View on the Dollar and Gold

To steal from our title this morning -- particularly when it comes to markets -- people have to have reasons, and the media's forever willing to accommodate. Apparently, however, the quality of those accommodative efforts is of secondary concern.

Note that the following headlines crossed my screen 16 minutes apart (and there was no new news on "global cues" during that quarter-hour):


Gold, silver prices fluctuate as buyers and sellers haggle over the price.

What's inspiring buyers and sellers is of course a source of speculation. And, for our purposes in managing client portfolios, we are forever speculating as to what's behind a given general trend.

Here's our latest on the dollar and gold:

In our January 5th of this year's weekly message, we highlighted our bullish thesis on the dollar, which was a 180 from our dollar thesis (bearish) at the beginning of 2017. Here's a snippet:

"Looking at present global macro, our thesis from the beginning of last year (dollar risk to the downside) is, for now, continuing to play itself out (better opportunities abroad forcing the dollar lower). This year's thesis (higher dollar), nonetheless, remains very much intact, but looking at the immediate weight of the evidence it could be (if it plays out at all) a later in the year story.

What makes our opinion this year even more compelling is that it's very much in the minority (as was last year's, which turned out to be correct). I.e., when/if the tide turns on the dollar, it'll get ugly (to the upside) as the masses move from the crowded side of the boat (gold bears would make out hugely in that scenario -- and, among U.S. sectors, tech will take the biggest hit)."

Well, we're now later in the year, and, sure enough, the dollar's seeing a strong rally:   click any chart to enlarge... 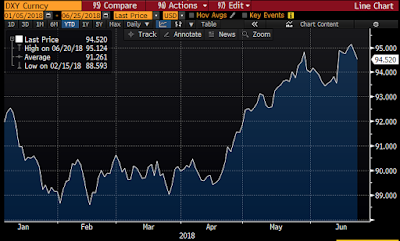 And, sure enough, the masses are fleeing that crowded side of the boat: 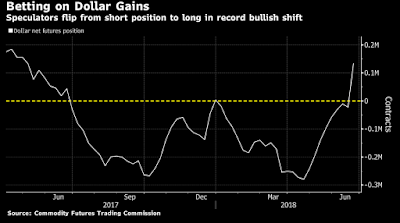 And, sure enough, gold bears (sellers) have been doing quite well of late:

Tech, however, until recently, has been hanging in there:

Posted by Marty Mazorra at 6:31 AM