Where Do We Go From Here?

In conversations with friends and clients (also friends), I hear over and over again how they (many of them) are concerned about the latest on foreign trade, but that they appreciate that something is finally getting done to "level the playing field."

What that tells me is that many folks -- given that they have lives -- either haven't had the time or desire to really dig into the issue, and/or they don't fully grasp it, and/or the sources where they dig offer up biased depictions of the present state of affairs.

While our primary purpose herein is to keep clients abreast of the whys and wherefores of how we manage their money, we also feel compelled to offer up some clarity on economic-related waters that politicians and the media are so adept at muddying up.

The one thing we can promise is that there'll be no politics in our depictions. Our ultimate aim is to forever see, and present to our subscribers, the world as it is, not how we or they may like it to be.

Where Do We Go From Here?

As you know, the first shots have been fired in what we can legitimately call a trade "battle"; call it a border skirmish, maybe. Whether or not it escalates to all-out war remains to be seen.


Question: Is any of this necessary?

My answer: Well, if the worry is truly our "trade deficit", no...

I don't see our "trade deficit" as problematic in any way shape or form. Just as -- like your investment portfolio, like the U.S. treasury auctioneers (their success keeps your mortgage rate, etc., low) and like anyone else looking to the world market for investment capital -- I don't see our huge capital account (captures the net investment capital coming into the U.S.) surplus, as being problematic under any circumstances.

Allow me to rephrase the question for those who believe our "trade deficit", or China's "trade surplus", needs to be brought in line.

Question: Is China's growing dominance as exporter to the world a problem?

Using Bloomberg's global database I just ran the numbers on the 20-year history of China's trade surplus (white bars) and the degree (in % terms) to which its exports contribute to its GDP (green line): 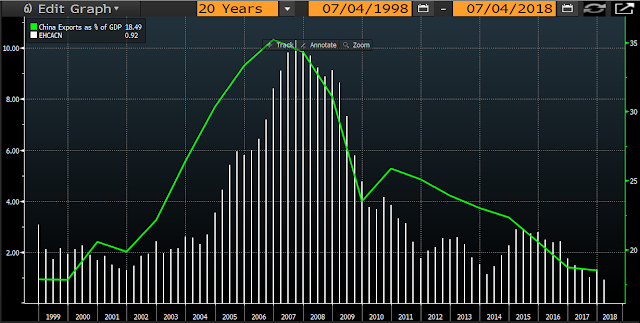 My goodness! China's export dominance, as well as its reliance on such, is falling like a rock! Which, by the way, makes a trade war less of a threat to its success than it would've been 10 years ago.

And, guess what, that's normal economic evolution as a country develops. I.e., as a country develops its citizens prosper. As they prosper (their incomes rise) their consumption rises. As their consumption rises their demand for the variety and pricing of globally-produced goods and services rises. As they gain more access to global markets (as buyers) the more important their currency (literally and figuratively) becomes and the more influence their country has on the world outside its borders.

Oh, and by the way, U.S. exports to China have doubled over the past 10 years:

Imagine the chest pounding today the above would inspire if, say, the U.S. had incited a trade war in 2007. Ironically, however, the global economic hit a trade war would've caused would've utterly stopped the above "progress" in its tracks.

While chatting with a well-traveled friend the other day she expressed how amazed she is by all of the Chinese investment she's seeing in Africa. "China is pouring money into Africa", I believe is how she put it. So what does that mean? Well, it means China is investing heavily outside its borders, which to some degree involves offshoring manufacturing to Africa (and other places); which means Africa (and other emerging countries) are picking up the manufacturing mantle as China moves further toward a services-oriented economy (like ours), while taking full advantage of the cheap labor and natural resources the developing world has to offer.

Consider how cozy Africa (as well as the other economies China is actively reaching into [India, for example]) -- with its population (human capital) and natural resources -- is feeling toward China right about now.

In terms of the most advanced stuff (5G is going to blow your mind), China's making friends there as well:


"While the U.S. has been pushing back against China, the world's second-largest economy has been looking to leave its mark on other countries in terms of 5G. Huawei has been lobbying Australian politicians. The FT revealed that the Chinese giant was the biggest corporate sponsor of overseas trips for Australian lawmakers. On Thursday, the Portuguese arm of telecoms firm Altice teamed up with Huawei to roll out 5G networks."

Frankly, we should be doing exactly the same things! Of course that had been our modus operandi for decades, which goes a long way toward explaining why the U.S. presently sports the world's reserve currency and a strong, advanced, globally-significant economy. Where we go from here is the question...


"...the White House’s policy-making process of "America-go-it alone" on a bilateral basis is out of whack with both the actual multinational production structure of world markets and the companion long-standing multilateral protocol of teaming up with friendly countries through existing international alliances (for which the U.S. was the chief architect)..."

And speaks to the economically-dangerous distraction that is the Administration's present obsession with tariffs:


"The unmistakable substance of the Administration’s economic policy—echoing of course, Trump’s slogan of "making America great again"—is one of both significant protectionism and castigating those outside of the United States as the primary source of any woes evident in the domestic economy.

It’s fundamentally counterproductive for Trump to ignore that there is in fact plenty of blame to be had at home if he truly wants to achieve his stated objectives.  And, finger-pointing at foreigners, no matter how well it might sell at rallies or on television, distracts attention from where it needs to be focused.

As a case in point, it’s hard to fathom that our nation’s dilapidated infrastructure, which, as I’ve argued in this space before, is the Achilles Heel of the vibrancy, productivity and sustainability of the U.S. economy, is foreign-born. Rectifying this problem is a classic investment-in-a-domestic-"public-good" need."

His article We All Should Worry About Trump's 'Divide And Conquer' Trade Policy is a thoughtful and compelling read that I highly recommend...