For this week's message, after commenting on the latest from our proprietary macro index, I'm going to simply copy and paste yesterdays internal log entry, which we posted for you here on the blog (worth reading again!), then re-post this morning's video (worth watching again!). These pretty well sum up our current assessment of general conditions.

As you'll read in yesterday's post, I suspected that our macro index would turn back to green (above zero), fueled by a strong stock market rebound (save for today) off of Wednesday's low. 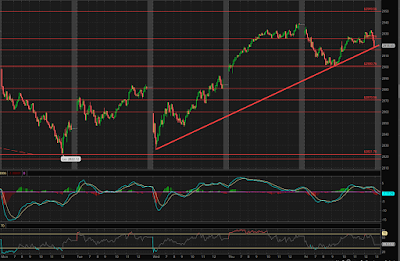 Well, our financial market subindex did improve by 9 points (via declining investor and advisor sentiment [excellent contrary indicators], and slightly better stock market breadth), however, that was only enough to move the subindex's score to a still-concerning -27.27.

As for other components, in the consumer column (which is within the economic subindex), weekly mortgage purchase apps (despite lower rates, and a surge in refinances) broke below what has been an upward-sloping channel, and consumer confidence went from positive to neutral. On a slightly better note, in the commodities column, raw industrials went from negative to neutral; the end result being that our economic subindex (contains 42 or the 84 data points we track) didn't budge from the previous week's score of +7.69. While +7.69 is nothing to write home about, given all the present uncertainties, we'll take it! However, and this is a big "however", within our financial stress subindex, the TED spread and the ML Global Financial Stress Index both went from neutral to negative, and global credit default swaps (CDS) spreads -- CDSs are essentially insurance policies backing bonds -- went from positive to neutral; bringing the overall financial stress subindex's score to -10 (this is one to watch very closely!).

The end result being that our macro index remains at -2.38 (denoting heightened recession risk), for the second consecutive week.

Here are the visuals for the data points featured above:  click any insert to enlarge...

Individual Investor Sentiment (stocks often rally when investors are bearish and, thus, sitting on cash to invest on their next impulse): 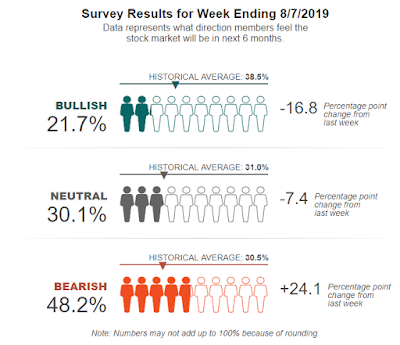 Investment adviser sentiment (yep, as a group, they're as bad as [maybe even worse than] individuals at predicting stock market direction): 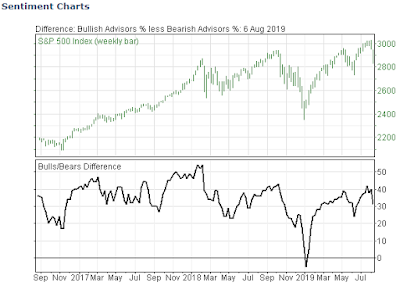 Should history repeat – assuming we receive confirmation from the PWA Index over the next several weeks that last week’s -2 was the real deal – stocks will stage a multi-week-to-month rally, purely on monetary and (where it can be had) fiscal stimulus, as authorities attempt to avert the coming recession.

The net effect of the valiant effort to keep the world economy afloat, will, alas, do nothing more than inflate asset prices and suck in unsuspecting investors (sadly, a mass of way-late-to-the-party individual investors will measure large in number), making the ensuing recession, and bear market, all the more painful as the asset bubble bursts.

All that said, I’m thinking it’s premature just yet to begin moving into all-out capital preservation mode in client portfolios.

For one, if equities continue to bounce through the end of the week, barring other weakening data points, we could see a marked rise in our financial markets subindex (ex; aside from improvement in price and possibly breadth-related data, adviser sentiment plunged last week, which will turn that component from red to green), enough to push our overall macro score into the green; in which case our flashing red lights will calm down to a flashing yellow.

For another, it’s painfully clear that our negative macro score has been primarily influenced by souring sentiment – although now bleeding into the hard data – due to the trade war with China, and the threat of it spreading to the rest of the world. Ironically, should the latest stock market volatility morph into a legitimate correction – we’d need to push 10-20% I suspect – we could very well see the powers-that-be wake up to the reality that they are about to bring on the next recession and, thus, their own political destruction.

Of course, as I’ve suggested of late, a 20% correction could be enough by itself to, in reflexive action, bring on the next recession; in which case, trade deals – while stocks will rally immediately upon their signings – won’t do the trick, and we’ll have to nonetheless live through months of economic (and stock market) pain. Which, as I stated Sunday, could be worse than what your run-of-the-mill recession would deliver.

Bottom line: We’re just not to the point where we can say with confidence that odds favor recession over expansion in the foreseeable future. There is, however, enough there – and the consequences if the economy is indeed about to contract are stark enough – to warrant sacrificing some potential upside right here by applying options hedges to client portfolios, at least until after the turn of the year…

Video Commentary: The Short-Term Noise, And My Longer-Term Concerns

Once playing, click the icon in the lower right corner for full screen. Focus should occur after a few seconds; if not, click the wheel to the left of the YouTube icon to adjust:
Posted by Marty Mazorra at 6:47 PM