This Week's Message: The Risk/Reward Setup

In our year-end 2017 client letter I expressed my general bullishness, as the macro setup was about as good as I'd seen in my 3-decade+ career. I also expressed, however, that a trade war ("protectionism") would put my bullish thesis to the test.

Well, as you noticed last year when, following a string of unfortunate developments around trade, culminating in the infamous "I'm a tariff man" tweet, and the arrest of Huawei's CFO as she was changing planes in Canada -- precipitating the worst December for stocks in 31 years -- and of course today, we're there.


We remained sanguine throughout last year's nearly 20% peak-to-trough decline in stocks, as our assessment at the time was that we were still in expansion mode, and that the bull market was still very much intact. We also presumed that such a steep correction in stocks would shock the players into coming together on a workable trade deal.

Well, alas, the sides are further apart today than they were on day-1, and our assessment of general conditions is that the risk of recession has increased exponentially.

Here again is my Tuesday blog post, this pretty much says it all, for now:


Being committed to always maintaining a discerning, if not skeptical, eye when it comes to data, trends, our own analyses, etc., we are forever challenging and testing our own theses in our perpetual effort to keep our clients' portfolios positioned within the most favorable risk/reward setup.


The following is simply a reminder of the point I made in a recent video commentary:

With our current view of the world, and portfolio strategy (temporarily hedging, without disrupting existing portfolio allocations) in mind, here's a simple graph of our PWA Macro Index since inception:  click each insert to enlarge... 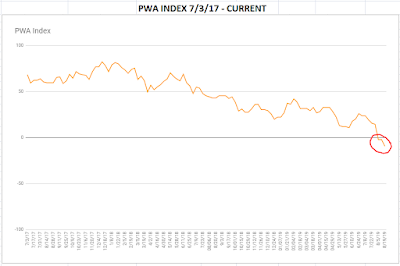 Note that it's below the zero line (signaling heightened recession risk) for the first time ever.

Now take a look at this graph of the S&P 500 Index along with the scores of roughly 20 years of back tests of our index (red shaded areas are recessions):

We've had two epic bear markets over the past 20 years, and in each occurrence -- after our index dipped into the red -- the market went on to test all time highs before ultimately rolling over. 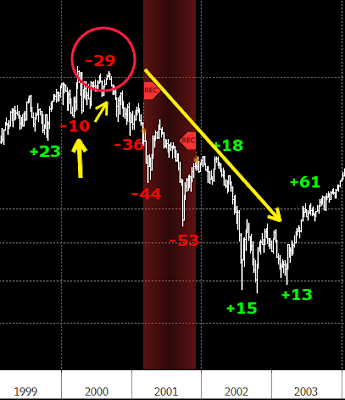 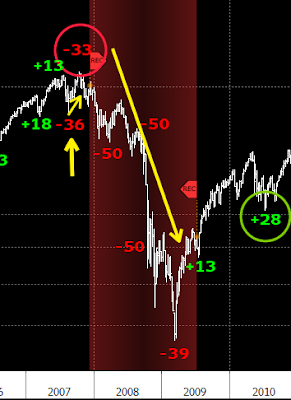 And, again, here we sit today:

While present conditions, and history, demands that we now shift to capital preservation mode, I'm honestly not convinced that the present bull market has yet seen its best days.

I.e., I believe that there's a legitimate case to be made that if certain geopolitical pressures abate in the relatively near future, what are presently some scary fundamental, and technical, conditions could actually resolve higher without the world having to suffer the next recession and bear market ahead of time. If, however, those conditions indeed resolve lower, I do see enough potential under-the-surface systemic risk (in the corporate bond market in particular) that could absolutely have the next downturn feeling a lot like 2008.

The fact that we're presently dealing with these two competing narratives explains why, for the time being, we're opting to hedge portfolios using options, as opposed to abandoning positions (creating taxes in non-retirement accounts) and running the risk of having to try and catch the market train if it leaves the station without crashing first.

As I illustrated in this video, and Nick did in this one, our option collar strategy also limits the upside should the market thrust higher from here, although by modifying it (the out-of-the-money long call position), we're still able to participate at a higher level should the market go screaming higher over the next few months.

Bottom line: Under the circumstances, we've made the decision to protect a chunk of this year's gains while giving up a chunk of potential future upside over the next few months; which of course is also what happens when we simply reduce our stock market exposure. This is just a much cleaner (albeit temporary) method while we allow present trends to play themselves out.