The narrative around today’s rally was fascinating (in that it presumably sparked the rally), and familiar. Against yet another literally economy-shattering jobless claims number came news that U.S. and China trade negotiators are up for a chat next week.

So let’s think through why such news might have the bulls all giddy. For starters, it kinda makes sense given how the infamous US/China trade dispute was the source of a fair amount of market volatility over roughly the two years leading up to the current recession. But to presume that even in the off-(zero)-chance they come out of next week’s talk with an agreement to go immediately back to the trade regime that existed pre-trade war, could the pre-trade war economy have held up against the historic headwinds this one faces? I don’t suspect that I need to answer that question for you.

So, then, we’re back to last week’s weekly message titled What Others Think Others Are Going To Do... (definitely one to read if you didn't get a chance).


From the opening paragraph:

“Keynes suggested circa a century ago that trading (as opposed to, I'll say, investing in) markets is not about assessing fundamentals, it's about what traders think other traders are going to do.”

Clearly, traders think other traders think that positive trade news is positive for stocks, because it was so during the latter stages of the previous expansion. Now throw in record Fed stimulus and you have to ask, what’s not to like about stocks right here?

As for present conditions, you be the judge. Here’s a graph for each of this week’s major U.S. data releases. I drew a red box around the period of heightened trade tensions and a red circle at the point where we sit currently (red-shaded areas denote past recessions): click each to enlarge...

Today's stock market rally was a bit better in terms of the internals than the last couple I've featured herein. But still nothing that remotely screams bull market:  click to enlarge... 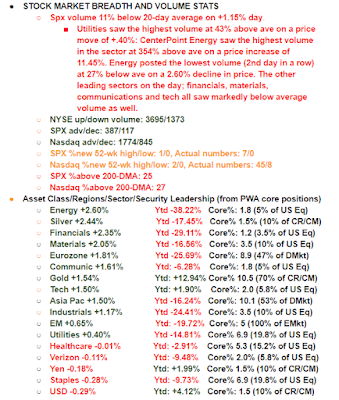 Next to the performance ranking for each sector is the % of our current core allocation it represents. Note that gold represents our highest weighting, which of course reflects our present view of general conditions...

We'll leave it there for tonight.

Thanks for reading,
Marty

Posted by Marty Mazorra at 7:17 PM