This Week's Message: "Awesome Time to Be Alive"

We'll start this week's message off by looking at the data I shared in our internal research call yesterday afternoon. The topic was the day's market internals.

The reason I'm using yesterday's action as my segue to this week's message is because in a number of ways it serves as a nice microcosm of the 2020 equity market to date.

For starters, while the major US averages were up yesterday, lots of stuff wasn't. Here's the breakdown for our core portfolio. I.e., long positions occupying 36% of our core portfolio rose yesterday while 45% of our core allocation declined. The balance sits in cash (FYI 4 of the entries are placeholder indexes for reference): 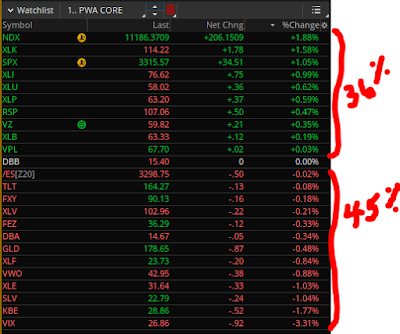 In order, top to bottom: tech, industrials, utilities, staples, Verizon, materials, Asia-Pac, base metals, Japanese yen, healthcare, Eurozone, ag commodities, gold, financials, emerging mkts, energy, silver, banks.
I.e., results were all over the place yesterday! As they've been all year...
I've made much ado this year about "short interest" (bets -- via selling borrowed shares that have to be settled by buying them back -- that a security is going to tank). Here's the latest for QQQ, the ETF that tracks the Nasdaq 100 Index:

Note the recent spike. I.e., traders who know how to short are betting that QQQ (read tech) is due for a fall.
My point about rising short interest has to do with the contrarian bullish aspect of it. Meaning, when folks stand to lose big if the stocks they've shorted begin to rise (since they have to buy them back), well, they buy them back, thus exacerbating the upside move. QQQ rose nearly 2% yesterday!
Speaking of the Nasdaq 100 Index, traders who speculate in its futures contracts are betting on a fall to a greater extent than they have in the past 12 years!
Here's the latest Nasdaq 100 Index Commitment of Traders Report net positioning for futures contracts (hugely net short!):

That's a recipe for big (short-covering) rallies on rallies!
Our macro thesis presently has it that a sustainably strong dollar will be hugely detrimental to all things asset and debt (globally) going forward. Which, of late has been the case even on almost a tick for tick basis.
Yesterday, however, that negative correlation (with stocks) broke down, particularly late in the session. I.e., the dollar stayed elevated while stocks rose to meet it:

Gold (our largest position presently), however, couldn't hang with the dollar yesterday: 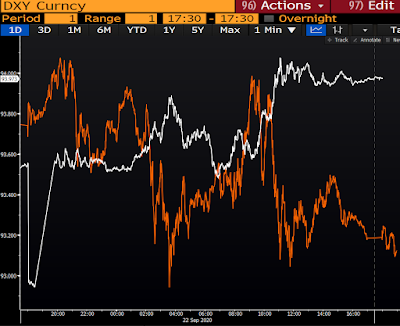 By the way, as I type, it's actually late-evening Tuesday, the dollar is rallying further, and, therefore, commodities futures are in the red. Stock index futures (Nasdaq in particular) are also looking to succumb (selling off a bit). But morning of course is a long ways off...
Update: Circling back at the open this morning, here's the overnight action in stocks (blue) and the dollar (negative correlation was somewhat back overnight):

As for other key stock market "internals" yesterday:
NYSE up/down volume (nearly split down the middle) certainly didn't reflect the price action in the major averages: 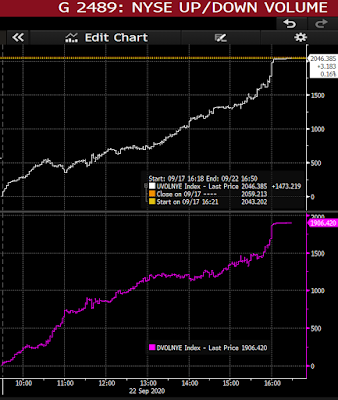 In terms of overall breadth:
Not bad advance/decline numbers for the S&P 500: 335 members's stocks rose/166 fell.
Not good for the Nasdaq Composite: 1,293 rose/1,390 fell.
Only 2 new 52-week highs for the S&P 500, no new lows. 20 new highs against 40 new lows for the Nasdaq.
Only 38% of S&P 500 members presently trade above their 50-day moving averages, 32% of Nasdaq's members.
As for total volume, it came in below average nearly across the board. Suggesting that yesterday's rally lacked conviction.
Nasdaq 100 Volume: 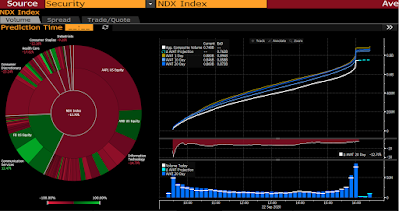 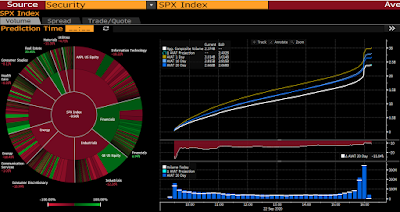 As for volume on a year to date basis:
Here, in the bottom panel, is our own indicator where we track the 10-day volume moving average (yellow line). Note how the line bottomed against our threshold right before the Feb/Mar selloff (top panel), then shot higher as stocks fell (circles to the left), and how it bottom just ahead of the current down draft, and how it's trended higher as stocks have trended lower.

Similar year-to-date setups are taking shape for much of the other data featured above as well...
Bottom line; on top of what is a most precarious macro backdrop, market internals remain anything but inspiring right here...
Three of us found ourselves popping in and out of our research chat yesterday afternoon/evening after Tesla's “battery day”. It was a lively conversation that delved into the future of technology and what it may mean for the labor market in the years ahead.
I'm thinking many of you will find it interesting, if not entertaining. As you'll see I'm surrounded by very sharp youngsters who keep me on my toes.
We'll start where Dan mentioned Bill Gates and his recent comments regarding artificial intelligence.
________________________________________________________________________________
Bill Gates thinks AI taking everyone's jobs could be a good thing - there isn't a lot we can do to stop it. But if it plays out like Gates predicts, it will be a net positive for the world. We might all have more free time because of AI, he says.

4:34
"There will be challenges because the rate of change will be faster in these next 20 years than it’s been before," Gates said. He concedes that the government will likely be forced to rework its social safety net programs, and help displaced workers retrain for the new economy, but if done right, it will be a net positive for everyone.

I was just talking about this a few months ago

4:35
plus the rate people procreate

I do think there are about 1 bajillion jobs that can be replaced w/ AI/ tech.. could be a retraction, then expansion and so on.. but it's coming nonetheless.. but speaking to more free time... there are serious inefficiencies today... I see & experience it every day.. and many people have a vested interest in keeping tech away.. either way.. will certainly be fascinating.
M: question for you.. all of this is coming, and you say it will create even more jobs... does that mean nearly all new jobs will be concentrated in AI/tech?

That's the ultimate question, and a lot of people will say technology hasn't displaced jobs yet, but historically, tech has always been built around set parameters of code to replace one particular role of someone. Allowing for new jobs to be created, and or maintenance persons to repair said tech. Artificial intelligence is NOT this. Advances in technology have consistently led to decreases in requirements of labor, and increases in quality of life.We are talking about machines that can learn, adapt to the environment, and solve problems, all without human intervention.

5:12
will it happen in 10-20 years? certainly not, but 50 years? I suspect we begin to see just how radically different the world will be

Yes.. these things have to have resulted in a net reduction of jobs... right?
https://www.youtube.com/watch?v=Ox05Bks2Q3s

M will say: the jobs were created somewhere else.. but aren't these all tech jobs?.. i.e. unskilled labor is in big trouble?.. has to be less jobs

So, I like the topic... It's one I've studied a lot over the years. It's something that obviously is rich with historical precedent. The term used among economists for those who believe that technology leads to the net destruction of jobs is "Luddite"... Named after a young man who led a band of 19th century English textile workers... they'd break into factories at night and destroy the new machinery that they believed would ultimately rob them of their jobs. Funny thing is, a decade later their industry employed multiple times the number of people vs before the technology was invented.
Years ago I was touring the packing shed of a client, I asked how many folks a machine that sorted peaches displaced. In total my guide told me it was roughly 60; they bought the machine 10 years earlier. I asked him how many folks they employ now, he said the workforce had more than doubled, and he credited it to the technological innovation they brought to bear since then. He said that they were able to build two additional sheds and expanded their farming operation by 5,000 acres...
There's more, but that said, I do appreciate the deep thinking you guys now bring to the topic. The notion that machines will service the machines is obviously a new wrinkle, to put it lightly...
And while in 50 years things will of course be radically different, the 1970 American would no doubt find 2020 to be most radical...
But again, how do you account for machines servicing machines?
So, if it's worth the effort, you start with a hypothesis: Technological innovation in the 21st Century will lead to net destruction of jobs... then present the evidence as to why. Or technology will lead to greater employment (despite the machine aiding machine concept)... and present why... Or, a third, might be, no net labor loss or gain.. and why...
A subhypothesis around procreation and how/why that may change due to tech advancement might come into play in the latter two...

yep, for sure... would have to be the case I think

7:31
i mean the first iphone came out after Nick and I graduated high school. look what that did. people literally have full HD camcorders and cameras in their pockets

Yes! no doubt in 50 years there'll be stuff unimaginable today... Given medical technology, seriously, we may even be having that conversation: me 108, you 80-something

7:38
true though, things are moving crazy fast. it's an awesome time to be alive that's for sure

M will say that they always said that

7:38
Yes truly feel we’re are at a turning point

yes it is! from so many perspectives... it's actually unique from a geopolitical/macro perspective -- I mean where we are now looks like it could be at the end of a long-term secular debt cycle... In fact, it's almost certain that we are... It's unique, but it's a lot like the 1930s/40s at the same time... societally-speaking very much as well...
It's a somewhat ominous scenario, but, frankly, it's fascinating and exhilarating as well... I'm captivated by the prospects and how we're going to successfully manage our clients portfolios as things evolve...

7:45
what's very cool is that, as a firm, we have me obsessed with the history of it all, the market structures, and so on... And you guys captivated by today's technology... Could actually be that it's arrived just in time, and will bring such massive productivity that it'll in some way alter the path... At a minimum, we'll see the opportunities to exploit when the timing's right! AWESOME TIME TO BE ALIVE!

Posted by Marty Mazorra at 6:55 AM