Charts of the Day: Why We Care About Sector Breadth

If you're at all wondering what keeps me harping on nearly every day lately about the poor sector breadth I'm noticing, well, Bespoke Investment Group -- having noticed it as well -- put some history to it this morning.

Apparently, over the past 30 years there have only been 3 that have seen a larger gap separating the best and the worst performing sectors as of the 15th trading day in (today): 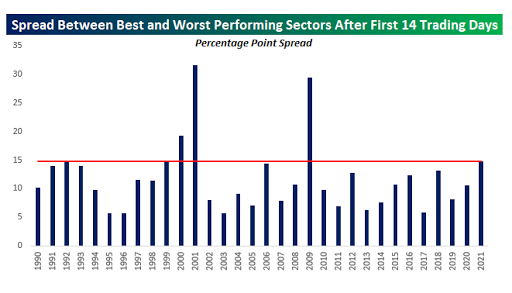 And, frankly, the 2 years following 1992 episode weren't much to write home about either: