Macro Update: Not What You'd Expect

While the graph of our PWA Macro Index is starting to look concerning (declining again this week, by 4 points to 10.20), the fact that what's ultimately driving much of the data -- as artificial (non-organic) as it is -- is nowhere near due to subside, has us anything but reactive right here. 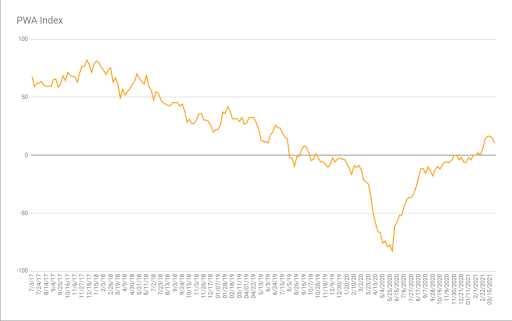 Heavy Truck Sales (not what you'd expect given how this data point typically reads coming out of recession):

Truck Tonnage (ditto what I said about Heavy Truck Sales):

Sector/SP500 Ratios (half of the cyclical sectors we track have underperformed the SP500 over the past 30 days, while all 3 of the featured economically-defensive sectors [bottom 3 panels] have outperformed. And ditto the above dittos):

Weekly Jobless Claims (while 684k is a historically-ominous number, the trend is much improved):

Non-needle movers worth mentioning:
Citi's U.S. Economic Surprise Index continues to suggest that economists have been a bit too optimistic about near-term general conditions:

PCE (the Fed's preferred inflation metric), came in below expectations -- fueling the fire for those who think that folks, like yours truly, who see inflation as a real threat going forward simply don't understand output gaps, labor market slack, etc.
Well, we/I do, but we/I also recognize that monster fiscal injections into the economy will continue going forward, against everything from production bottlenecks (that are slow to cure), protectionism, on-shoring (Intel announced new production facilities coming to Arizona [ya think maybe chips will be a bit more costly to produce there than, say, in Chengdu?]), and so on.
All the while the central bank under no circumstances will allow interest rates to rise enough to quell the pressure, as would occur in a true free market.

So far, by the way, the market agrees with us/me:

2, 5 and 10-year breakevens (inflation expectations reflected in the yield spread between inflation-protected and nominal treasuries) continue to rise, notably:

As I suggested in our main message this week, and per my "not what you'd expect" comment above, as well as the sentiment expressed in paragraph 1 above (artificial), the data are being notably affected (distorted) by massive government intervention.
I.e., the rising and falling of data in response to the timing of said intervention makes for an ultimately challenging, if not precarious, investing landscape -- and, again, begs the question, what happens when it comes time to turn down the spigot, or when the law of diminishing returns finally reaches its inflection point?

"Much of the forthcoming data will be unusually distorted, to say the least, as they'll be scored against year ago comparables that occurred during the massive COVID-inspired contraction. I'll of course take that into account as I report to you on the state of general conditions over the weeks/months to come."

Posted by Marty Mazorra at 2:56 PM