This Week's Message: Thinking Out Loud and A Few Highlights From Our Latest Messaging -- Or -- The Tail Be Wagging the Dog

For this week's main message I'll simply think out loud (well on my keyboard) for a minute then cut and paste a few highlights from our most important recent messaging.

As I type, the Federal Open Market Committee (FOMC) has just concluded this month's rate policy meeting and has issued an official statement that, essentially, the economy's looking up, they'll keep the Fed Funds rate down for the next couple of years, and inflation is rising, but, take heart, it's only temporary.

What's not to like? Stocks initially did, with the Dow jumping 200 points and the Nasdaq going from notably red to nicely green.

My comment from earlier today that odds I suspect favored a market decline this morning, had to do with how J. Powell might field the press's questions on ycc (yield curve control)... That's yet to take place... Oh, and inflation -- which pushes the ycc narrative -- will be a hot topic too...

In any event, of course, whether the market rallies or tanks on how Powell handles himself over the next hour or so -- barring some earth-shattering out-of-the-blue Fed resolution -- has utterly zero to do with how we'll approach the markets in the months to come.

The painful fact that literally the tail (the equity market) be wagging the dog (the Fed) is, well, a sad tale, but, alas, it's one that's firmly embedded in the harsh, debt-ridden, reality of today's setup, with no other to be told for far-too-far into the foreseeable future!

So, as for poor old Powell today, his response to questions on inflation will be "we see it as transitory, but if it's more, we have tools with which to deal with it."

I mean, they do, but their tools consist of raising interest rates and cutting QE (curtailing the buying treasury debt and mortgage backed securities), and a handful of other measures that amount to tightening monetary policy.

I.e., given that they're desperate not to burst financial market bubbles, saying that they have tools to fight inflation is like saying, we can use our trusty blow torch on those inflation weeds, which happen to be sprouting amid a veritable forest filled with nothing but incredibly dry tinder.

So, yeah, make no mistake, those tools will be gathering rust and dust for quite some time to come...

To conclude today's musing, our core portfolio is up 0.49% on the day (at this moment) with the stuff we like most (fundamentally, long-term!!) leading the way. That, in order, would be metals miners, MP (rare earth miner), gold miners, base metals, silver, oil services, U.S. industrial stocks, Eurozone equities and U.S. materials stocks. While the S&P 500 (everybody's benchmark) is up 0.39%.

Now, you clients, you can disregard that last paragraph (the implied comparison to the SP500) as anything meaningful, for, as I remind you ad nauseum during our review meetings, the present setup is not remotely like the one we enjoyed from 2009 to late 2019... And, thus, our portfolio -- while certainly influenced by what goes on in the stock market -- is a much different animal than what most folks are still chasing around these days. Has to be, frankly, to accommodate for present reality.

"...housing starts reported this morning missed estimates by a whopping 10%. Like I said yesterday, I'm generally not warm to the convenient cold weather excuse, but, yes, this time I do believe -- to no small degree -- it fits. That said, mortgage rates are now "comfortably" above 3% and, well, the price of materials (read lumber!) is through the roof. Yesterday's release of the NHIB Housing Index (homebuilder sentiment) was disappointing: Higher lumber prices were mentioned, big time! And the NHIB estimates that they alone add $24k to the price of your average home... Oof!!

The good (global) news overnight was that the busiest port on the planet (Singapore) saw activity surge in February. Although Japan's trade data lagged (Lunar New Year contributing to the down), but, of the two, Singapore's the one to watch."

"In terms of weak February retail sales, don't sweat em, not in the least. For one, while weather is too-often a convenient fallback for the unrelenting permabull, yes, part of February's problem was indeed weather. Plus, January was revised notably higher, which notably mutes the sticker shock of February's miss. And of course we must ask, how long does it take to blow a $600 dollar (December) stimulus check? As you know, another $1,400/person is hitting bank accounts as I type...

The latter screams the question, how real is this recovery? A question we find ourselves asking in virtually every one of our weekly macro updates of late."

"This week's pause notwithstanding, given the pending "stimulus" to come, I have rising expectations for our general conditions indicator over the coming months."

"So, possibly as early as this weekend a lot of folks are going to receive a very nice injection of cash into their bank accounts. While we can get into the whys and the wherefores and pontificate on need, inflation, distortion, yada yada, we'll just for now acknowledge that such government largesse to this point has been very bullish for the stock market."

"...make no mistake, it's not just U.S. central bankers I'm referring to. I mentioned in yesterday's video how, Tuesday night, China stepped right in and bought up stocks (on a mere 3.5% pullback). And, lo and behold, while the European Central Bank (ECB) held pat on interest rates yesterday, its leader said in no uncertain terms that they do not like the recent rise in rates and stand ready to speed up bond purchases, big time, to solve that problem. EU-member government bonds promptly rallied (yields fell) on that news...

Have a look at the size (and crazy growth) of the ECB's balance sheet: 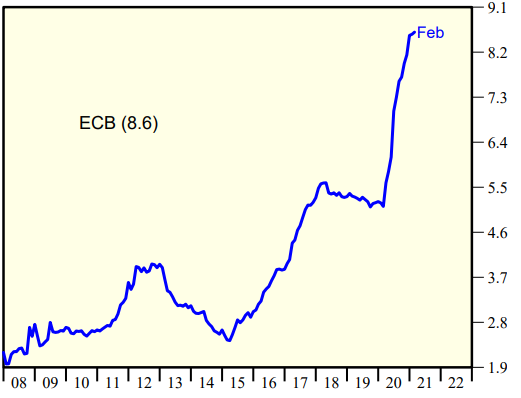 Yes, eventually, that matters. But, alas, "eventually", in the minds of myopic central bankers, is not the least bit their concern these days.

And, to top it off, CPI came in as tame as a kitten this morning -- smack in the face of folks, like yours truly, who believe inflation poses clear and present danger.

Beginning with the latter, I'll just throw out an unsubstantiated (at least in this brief post) don't hold your breath. Well, unsubstantiated other than to point out that declining used car prices pushed down on the CPI's goods component, while those in the business who compile the Manheim Used Vehicle Index tell us that used car prices actually spiked 3.8% month-on-month, and are up 18% year-on-year... That's interesting. While another drag on goods prices was apparel.... Well, going forward, let's think about the economy continuing to open up, and the fact that the average American gained some 12 pounds while holed up at home this past year... hmm...

"You see, while, again, the risk is absolutely there, the devastation that a massive bear market would bring to the economy is far more than the institutions most responsible for our debt mess are willing to bear -- and they control the creation of money (the Fed), how it's spent (at the federal level [the treasury and Congress]) and -- they believe -- the level of interest rates (the Fed).

Still, by the way, this doesn't mean we should be playing in those high-flying tech names. I.e., there are much smarter, safer ways "to play" the present setup..."

Thanks for reading!
Marty
Posted by Marty Mazorra at 12:19 PM