This Week's Message: It's Way Different This Time -- Except When it Comes to Share Buybacks...

For this week's main message I'll point to two of the developments that are influencing our present macro thesis, then share some key highlights from our latest messaging.

Toward the lead-in to last year's blink-on-an-eye bear market in equities, I, on numerous occasions, pointed out that the bull market at the time was largely characterized by the fact that the only meaningful net buyers of stocks were the underlying companies themselves.

Here's the chart I featured at the time (orange line = share buybacks): 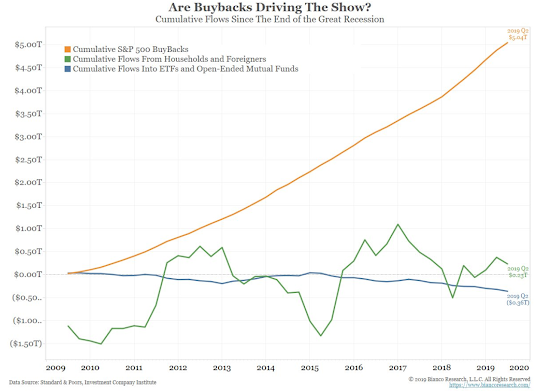 It got to the point, as it tends to toward the end of bull markets, where the volume of share buybacks and dividends (green mountain below) exceeded the underlying company's free cash flow (blue line) -- in epic fashion, no less. I.e., companies were borrowing big time to do what in theory should only come from surplus cash flow: 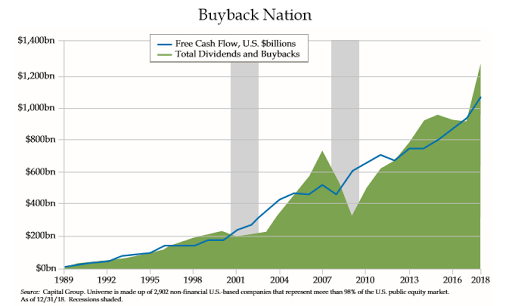 Well, alas, it appears as though they're right back at it.
Here's from last Sunday's Wall Street Journal:

"Already this year, U.S. companies have authorized $504 billion of share repurchases, according to Goldman Sachs Group data through May 7, the most during that period in at least 22 years. The pace of announcements trounces even the 2018 bonanza that followed the sweeping tax overhaul of late 2017."

"U.S. companies also ramped up dividend spending in the first quarter, data from S&P Dow Jones Indices show, increasing their payments by an aggregate $20.3 billion on an annualized basis. That marks the largest quarterly increase since 2012."

Now, if you're of the mind that stocks should just go up, always and forever, you're loving this news!

If, however, you're a macro-driven, big picture thinker/investor, you're pausing right here and recognizing that the Fed not only saved markets (and egregious risk-takers) from hell last year, they did such a good job of it that that brief three-week brush with terror did virtually nothing in terms of quelling what is typically a late-stage hubris that has companies willing to spend their balance sheets (lever them up even) on what amounts to an outright smoke-and-mirror pumping of their own stock prices.

Speaking of their balance sheets, here's more from that WSJ article:

"The increased desire among companies to spend comes as the U.S. economy is edging toward normalcy, and as executives are deciding how to deploy the cash hoard they amassed last year. Cash holdings among S&P 500 companies topped $1.89 trillion at the end of last year, according to S&P Dow Jones Indices, an all-time high and a nearly 25% increase from the end of 2019.
Many issued record-breaking amounts of debt to help bolster their balance sheets, too."

And here's the thing, on 1/1/2020 U.S. corporate debt (loans and issued securities) totaled $10.1 trillion. Today it's $11.1 trillion. I.e., better than half of that present $1.89 trillion of cash on balance sheets can be attributed to newly added debt. And while the data do show a pickup in capex spending (business expansion), the fact that buybacks so far this year eclipse anything seen in the past two decades says, again, that companies are willing to impair -- and/or opt not to repair -- their balance sheets for the sole purpose of boosting their respective share prices.
Which brings me back to the issues around lack of capacity (i.e., that half-trillion [share buybacks] not going toward increasing production) that, when combined with outright deglobalization, and its attendant geopolitical tensions, leads to an arguably more inflationary environment going forward.
And speaking of "deglobalization", we're seeing it presently in the international flow of funds data as well.
The following chart tracks the sources of purchases of U.S. treasury debt.
Note that non-U.S. actors (pink bars) are presently net sellers (compare that to their strong willingness to buy the huge issuance during and after the '08 crisis). The fact that the Fed (blue bars) represents far and away the largest current buyer supports in spades our weak-dollar (inflation) thesis. 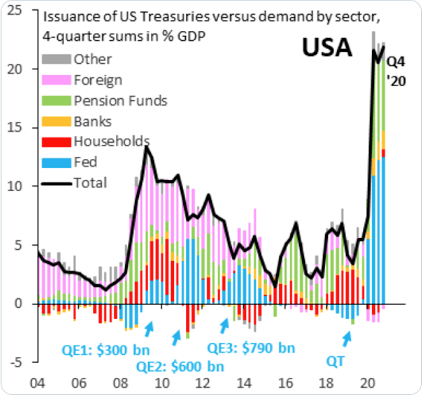 Yes indeed! It is way different this time!

A few highlights from recent posts:

"...while stuff like clothes, sporting goods, building materials, all things department stores, and even online sales all declined month-over-month, bars and restaurant sales rose 3%, after being up 13.5% the month prior.

You gotta wonder, after folks satisfy their pent-up demand for someone else's cooking, what's the retail landscape going to look like when they get back to those shiny new kitchen utensils (record sales of such occurred during lockdown) they actually learned how to use whilst their favorite restaurants were shuttered?

I mean, are stuff sales really going to rebound to offset what will be a letdown in, for example, eatery sales once those appetites are satisfied? That's something we think about a lot these days!"

"...I suspect we'll see inflation settle into a steadily rising structural trend, and in the process fuel what will likely turn out to be the next long-term commodity supercycle."

"...before we settle into that structurally rising inflation scenario (if indeed that's where we're headed), I look for a notable calming of the thrust we're presently experiencing -- as the worst of the production bottlenecks subside -- inspiring a chorus of I-TOLD-YOU-SOs from the "it's transitory" camp."

"As you can see (green trend lines on the 50-year chart below), commodity bull markets tend to last a very long time. This one -- while, per my mentions in recent video commentaries, I anticipate a potentially notable (and healthy) correction in the not too distant future -- is just getting underway:"

"Bottom line: The markets utterly own the Fed. And while selloffs in equities indeed get their attention, it's the credit markets that ultimately keep them up at night. Raise interest rates and just see what happens to a bond market that sports yields so low, on even the absolute junkiest of debt (CCC-rated corporate bonds carry a 5 handle currently), that it's become virtually unrecognizable..."

""Don't trust your intuition or what you think is true. These will be biased by your experiences, environment, and political persuasion. If you don't have data, you don't have knowledge." --Euan Sinclair

Posted by Marty Mazorra at 7:50 PM