This Week's Message: Our Present Inflation Narrative -- and the Potential For Something 'Long-Term' Special In Commodities

One of the late great economist Milton Friedman’s oft-quoted assertions is:

“Inflation is always and everywhere a monetary phenomenon"

Suggesting that if the powers that "print" money print more over a given period than the economy's wherewithal to absorb it, inflation is your unavoidable consequence.

Well, if that's true, how is it that we've seen a pretty steady drip, at times garden hose, of money printing the past 25 years with very little inflation to show for it?

Many an economist will tell you that Dr. Friedman was remiss in not specifying that increasing "money velocity" is a necessary ingredient in the inflation equation -- it being the pace at which a dollar changes hands within an economy.
I.e., popular opinion among economists has it that money actually has to actively chase goods and services around to create inflation. Just being printed and getting stuck in bank reserves, and/or in folks savings accounts, by itself doesn't spark higher prices of goods and services.
Well, makes sense, although, as yours truly pointed out in the daily devotional I published back in 2013, inflation can indeed occur without an increase in money velocity:

"If you and five others are stranded on a desert island and you have a granola bar for sale, what’s it worth? If your famished fellow castaways have one dollar among them, it’s worth a dollar. If they have ten, it’s worth ten."

"But what if the castaways have ten dollars and you happen to have two granola bars? Well then, they’re worth five each. Then, if a chimp steals and eats one, the remaining one, experiencing 100 percent inflation, is worth ten. Now wouldn’t that be a supply disruption, as opposed to a monetary phenomenon? Yes, that would be a supply disruption, and a monetary phenomenon. In that the supply of money did indeed increase—on a per-unit basis."

And, lo and behold, today we get both; supply disruptions and, per the right corner of the above chart, an increase (an epic one no less) in the supply of money (assuming that newly "printed" money escapes the bank reserves channel [much of it is/will this time around])!

As I've been stating herein of late, despite having lived intimately with all things market and economic since 1984 -- while I remain open to all possibilities -- I'm in the camp that believes we're finally staring down decent odds that inflation post the current supply shock will be structurally rising phenomena.

While we dabbled in commodities off and on, although always sparingly, the past few years, we viewed the modest periodic bouts of inflation between 1999 (the last time we held gold as a core position) and the present as most-likely transitory, which is precisely what they turned out to be.

Including gold (which one might argue is more a currency than a commodity), commodities currently occupy roughly 23% of our core portfolio. Throw in our exposure to materials, mining and energy stocks, and we're expressing our forward inflation (and infrastructure spending) view to the tune of roughly 38% of our core asset mix.

So why now, after all these years, do I see inflation as a potentially long-term risk going forward? In other words, what's different this time?

Well, for starters, as it turns out Dr. Friedman may not have been all that remiss in leaving velocity out of the equation after all. 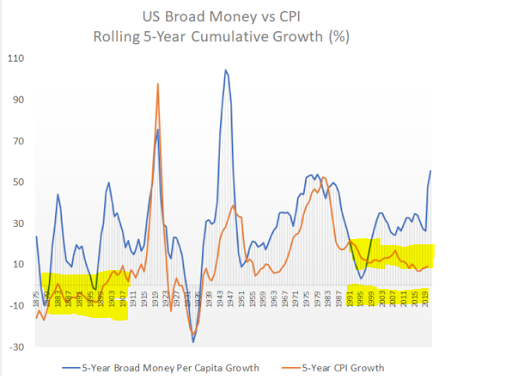 Lynn points out in her excellent piece The Ultimate Guide to Inflation, the two stretches where the two didn't go hand in hand; 1875 to 1910 and the 1990s to present.
So what explains those two aberrations? Must be lack of velocity, right?
Well, no: Looking at our 60-year chart of the velocity of M2 money supply, the first half of the 90s saw it accelerating as CPI was rolling over. And the hugely inflationary 70s (rectangle below) occurred while velocity was unambiguously anything but going through the proverbial roof:

Here's Lynn's chart again with a red rectangle capturing the rising inflation (and money supply) that persisted throughout the entire 70s decade. 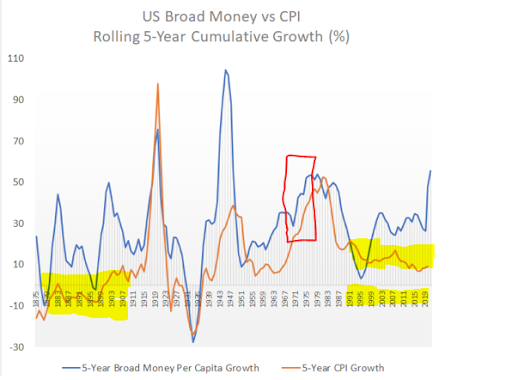 So, again, I ask, what explains those 2 exceptions to the usual money supply/inflation correlation?
As Lynn points out in her piece, the 1875 to 1910 period was characterized by:
In essence, major technological advances, space to grow, and eager, cheap labor combined to counter the inflationary impact of a budding financial system that provided substantial money supply growth for much of the period.

As for the 1990s, of course that one's easy; an epic tech revolution unfolded, creating disinflationary productivity gains (blue line below) like nothing seen since, well, the late-1800s:

And, not to mention, the 90s were also characterized by:
So, to bring it home, I'll summarize below why -- amid what may be a period of relatively low velocity of money, heavy debt burdens, and, we presume, further technological advancement -- I see increasing odds that we're at long last on the cusp of something meaningful (but not 1970s meaningful, mind you) with regard to structural inflation risk:
Now, all that said, before we settle into that structurally rising inflation scenario (if indeed that's where we're headed), I look for a notable calming of the thrust we're presently experiencing -- as the worst of the production bottlenecks subside -- inspiring a chorus of I-TOLD-YOU-SOs from the "it's transitory" camp.
Thereafter I suspect we'll see inflation settle into a steadily rising structural trend, and in the process fuel what will likely turn out to be the next longer-term commodity supercycle.
As you can see (green trend lines on the 50-year chart below), commodity bull markets tend to last a very long time. This one -- while, per my mentions in recent video commentaries, I anticipate a potentially notable (and healthy) correction in the not too distant future -- is just getting underway:

Thanks for reading!
Marty
Posted by Marty Mazorra at 8:48 AM