An uptick in the JPMorgan Global Composite PMI (Purchasing Managers Index) has our macro index back above 20 this week (20.85). 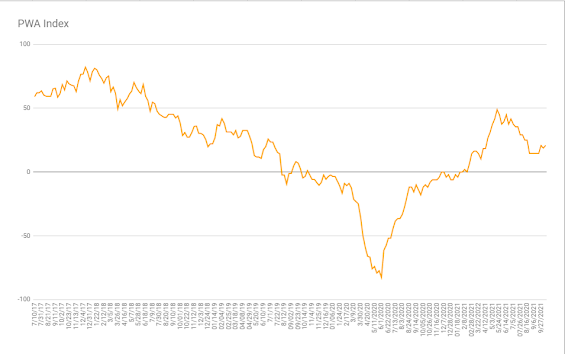 Other inputs worth mentioning:
Auto Sales.
Here's from last Tuesday's blog post, where I also touch on the hit from rising energy prices to corporate bottom lines and, thus, to the economy:

"In our portfolio discussion yesterday Nick and I pondered the coming earnings season. The key question: How are companies going to handle their forward guidance when so many are hamstrung by lack of necessary materials, components and such?

The Auto industry for example:

That nasty-looking chart has far more to do with the lack of components (chips in particular) than it does lack of demand for cars.
And what about energy costs? They have to be a not-small hit to many bottom lines.
Here's economist Peter Boockvar yesterday on why (the bolded part) we remain long-term bullish on fossil fuels:   emphasis mine...

"While Europe is in a power plant/natural gas/coal crisis with prices spiking, I read this on BN today, “European banks are beginning to drop clients that pose a climate risk rather than face the possibility of higher capital requirements, according to the watchdog overseeing the development…There’s already evidence that upstream oil and gas projects are falling out of favor as banks move beyond coal exclusions.” The transition to ‘clean’ is all well and good but if the ‘clean’ part is not fully ready to take the baton from the ‘dirty’ than getting rid of the ‘dirty’ will only result in sharply higher prices for energy everywhere which will in particular hurt parts of the world least able to afford it. I remain bullish on energy stocks, particularly the European majors.""

Speaking of hits to bottom lines, and, thus, to the economy, take a look at this 5-year chart of the CRB Raw Industrial Materials Index:

And, not to mention, the Bloomberg Commodities Index:

Although, frankly, it's just now breaking out of a long down trend:

Although, while we're still talking crazy-high, we're seeing some rolling over in the cost of shipping a container from China to LA:

While Friday's jobs number missed the headline mark, on further inspection, it really wasn't all that bad.
Here's from yesterday's morning note:

At second blush, however, it was fine:

For starters, July's and August's numbers were revised up by a total 169k. The issue for September was a notable decline in public education jobs, which economists are chalking up to confused seasonal calculations relative to what occurred last year. The private sector came in at 317k, which, when factoring in prior months' revisions, wasn't far from expectations. And then there was the ADP (payrolls) number reported Wednesday (up 568k).

The wage and hours worked data reflect the challenges employers are facing in attracting and retaining workers, which flies in the face of arguments suggesting today's number reflects economic weakness."

Jobless claims declined (by 22k from the previous week) for the first time in 3 weeks.
The ISM Services PMI (yellow) ticked higher last month (17 of the 18 industries surveyed reported growth):

And Consumer Confidence is looking suspect:

Bottom line, while the economy's pace has (on balance) slowed of late (making for a challenging setup when we consider the latest inflation reads), recession risk remains relatively low.
However, like I said a couple weeks ago:

"...there's this thing called reflexivity that says a major financial market meltdown could indeed bring the economy right down with it.
And make no mistake, the Fed is uber-sensitive to what they call "the wealth effect" (people do stuff [spend] when they feel wealthy!). I.e., with all that household net worth tied up in such a toppy stock market, well,  you can bet that the Fed's board members are indeed  sleeping uneasily these days... Fearing a reflexive economic jolt should they misstep and induce a selling panic...
So, clients, if you're at all wondering what keeps us so stubbornly and actively hedging our (your) major downside exposure these days, well, there you have it!"

Posted by Marty Mazorra at 1:44 PM