Over the years I've devoted volumes herein and elsewhere expressing my concerns (well... complaining) over the folly of government intervention into the functions of the economy.

Well, I suppose it's all fine and good to educate folks on (complain about) how the misallocation of resources (via government diktat) impacts the economy and the markets, in the end, however, our job here at PWA is to see the forest for the trees and, in the process, protect and grow our clients' wealth.

With that in mind, here again (bolded where they comport with the above) are the traits that we believe define the world's best portfolio managers:

1. A passion for macro economics and market history.

2. A firm understanding of intermarket relationships.

3. A firm grasp of global macro and geopolitical developments.

5. The ability to transcend his/her ego and political preferences.

6. A willingness to buck prevailing market trends (diverge from the crowd) when the risk/reward setup inspires it.

7. An understanding of and appreciation for the uncertainty of markets.

8. A flexible and open mind.

It's certainly no secret to clients that we are now long-term bullish on inflation, and, therefore, inflation-sensitive assets going forward.

And, make no mistake, as we've discussed and illustrated, the incentives and constraints that have captured governments the world over -- as well as the central banks of the most developed economies -- support our position, in a big way!

Here, one more time, are the main bullet points from our longer-term inflation thesis:
While indeed there are risks embedded in the above, at the same time, investment opportunities abound!

Cases in point:
We believe we sufficiently broad-brushed our case for commodities overall in Part 2, and made our case for gold, silver and ag specifically in Part 4, so here we'll explore oil and the industrial metals space.
Setting the stage:
Typically when you see price increases like the following
Bloomberg Commodity Index 5-year daily chart,

you expect capital investment to increase (big time!) on the part of eager-to-expand producers.
Well, hmm... not this go-round: 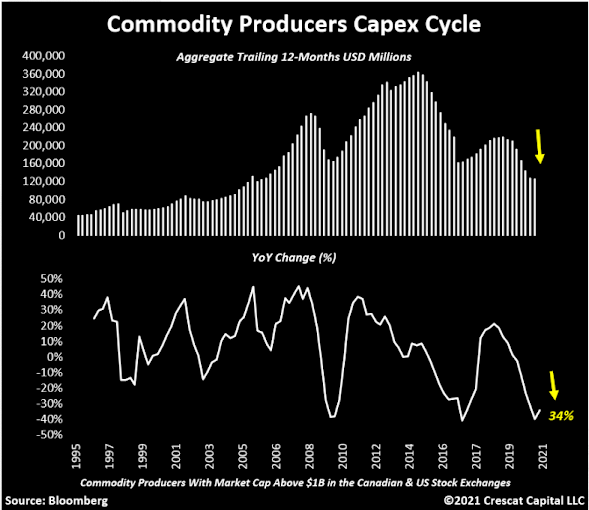 Chart courtesy of Crescat Capital
Now, with regard to oil producers in particular, ask yourself, if you were them, knowing what you know about the global push toward renewable energy (i.e., their environmental, social and political challenges), would you commit the billions necessary to expand production?
Adding fuel (pun intended) to that fire, here's macro strategist Luke Gromen suggesting matters may even be worse than the lack of capex alone:

So, despite aging oil fields, the environmental, social and political backdrop has us assuming that the future of the industry is more likely to be about being shareholder friendly (read share buybacks and dividends) with their capital than what you might otherwise expect given the pricing and production backdrop.

With regard to base metals producers; them having gotten, frankly, stupid a decade+ ago when China was building "ghost cities" -- i.e., borrowing and expanding to the extreme -- and suffering the inevitable market consequences of the come-down (shaded area below), suffice to say that we like the go-forward setup for what we view as an early-stage bull market in a now-profitable sector -- particularly against that capex backdrop charted above:

And speaking of base metals, a look at copper is most instructive...

Throw in essential minerals such as, to name just two, lithium and cobalt, and you come up with demand/supply graphs like the following (note the rolling over of operating (dark blue) and under construction (light blue) production for copper (the red line denotes demand): 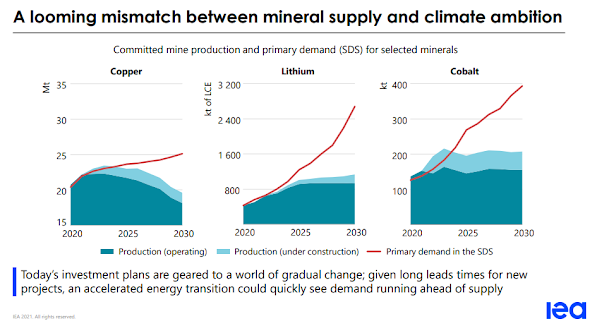 While what we're sharing is not lost on the investment community -- hence we've realized very nice gains in our related positions over a short period of time -- and corrections will indeed come and go as we move forward, we see odds favoring notably more upside in the resources space over the next several years.

And, speaking of the investment community, despite the fact that the setup we've described is no secret, government pension fund managers remain notably light in their allocation to commodities.
Of the $4.5 trillion in assets: 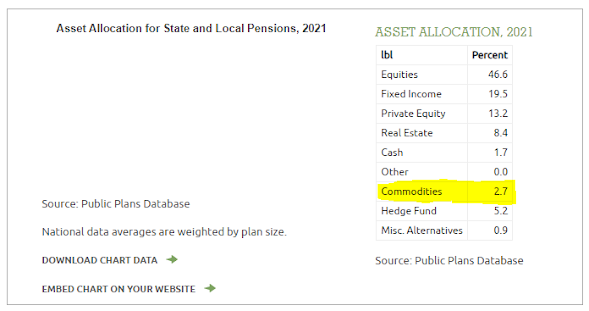 Imagine if they were to come off the sideline...
Without getting deep in the weeds on certain regional dynamics that support higher commodity prices, such as the following from BCA Research on the world's top two copper producing countries (emphasis mine),

*By the way, the "protest leader-turned-legislator" won…

we think we've sufficiently described why we’re including metals and minerals, and the companies that mine them in our core allocation.
So, there you have it folks; while in 2021's year-end messaging we've expressed our concerns over, and illustrated, the real risks popular markets presently face, we do see serious opportunity ahead in certain sectors, regions and asset classes for the patient, long-term, volatility-tolerant investor...
Or, in summary, and to bring this year's final message to a close:
In Part 1 we had a little fun describing how we view our role in our clients' lives.
In Part 2 we dug into our inflation thesis.
In Part 3 we made a valuation, income and reversion-to-the-mean case for US value and non-US equities.
In Part 4 we dug further into the precarious setup US growth stocks find themselves in and explored our current top 6 positions.
In Part 5 we explained what it means to be truly diversified, then we touched on our US sector allocations.
And in this Part 6 we got below the surface on what we see as a major, virtually unavoidable theme for several years to come.
Any areas/themes we didn't cover (such as fixed income, and other regional themes we're expressing in our allocation) will, as always, be addressed throughout our daily and weekly messaging going forward...
And finally:
Dear clients,
We honestly can't express enough how truly blessed we are as a firm to work with such an amazing group of people. We are honored beyond words by the faith and the trust you have placed in us to manage your portfolios through what are forever uncertain times.
Taking from our website (a completely reconstructed version will go live very soon, btw), the following explains what we see our ultimate purpose to be:

"If our clients live their lives in comfort, if they go about their days without a financial worry, without reacting to or fretting over the inherent volatility of financial markets — if our commitment to them instills, or enhances, that sense of wellbeing — we are indeed successful as a firm."

Happy New Year to You and Yours!

Attention non-client subscribers, a reminder:  Nothing on the blog should be construed as investment advice. The examples expressed relate to portfolio management we perform on behalf of our clients, and, again, under no circumstances are they to be considered recommendations to the reader.

Posted by Marty Mazorra at 4:38 PM