We subtitled our May 13th of this year message "Our Present Inflation Narrative -- and the Potential For Something 'Long-Term' Special In Commodities."
In it we bullet-pointed what we view to be the key factors amid today's evolving global general conditions that have us presently in the structurally rising inflation camp.
We'll update our bullet points below, but first we want to point out, once again (via an excerpt from that 5/13 post), that we don't see inflation, nor commodity prices, rising in a straight line.
Here's from that May blog post:

Now, all that said, before we settle into that structurally rising inflation scenario (if indeed that's where we're headed), I look for a notable calming of the thrust we're presently experiencing -- as the worst of the production bottlenecks subside -- inspiring a chorus of I-TOLD-YOU-SOs from the "it's transitory" camp.

Thereafter, I suspect we'll see inflation settle into a steadily rising structural trend, and in the process fuel what will likely turn out to be the next longer-term commodity supercycle.

As you can see (green trend lines on the 50-year chart below), commodity bull markets tend to last a very long time. This one -- while, per my mentions in recent video commentaries, I anticipate a potentially notable (and healthy) correction in the not too distant future -- is just getting underway:

And while we've yet to see that letup in the inflation prints (we expect it as we move into 2022), we are indeed seeing the corrective action we expected in commodities.

Here's a year-to-date look at the (above-referenced) Bloomberg Commodity Index; shaded area captures the date of the above-referenced blog post to current:

Updating the long-term chart, you can see, recent corrective action aside, that the new nascent up trend remains intact:

Unlike US stocks in the aggregate, commodities as a group have a long way to go before threatening their all-time highs.

Here again are the main bullet points from our longer-term inflation thesis:
Now, while, again, we do anticipate a letup in inflationary pressures as bottlenecks ease, if -- structural pressures notwithstanding -- you're sympathetic to the notion that COVID-explained supply constraints entirely explain the decades-high inflation we're currently experiencing, allow me to disabuse you of that popular notion.

The bars in the top two panels track the amount of direct-to-consumer government payments made for the 12 months to April of this year. The bottom panel represents wages and salaries across the US workforce: 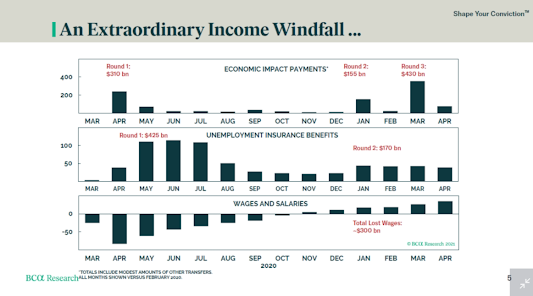 So, $300 billion net wages lost, replaced by $1.5 trillion of government transfer payments!
Make no mistake, you replace lost income among consumers at a 5 to 1 ratio, and, indeed, you're going to see the kind of spending that would create severe bottlenecks, with or without a global pandemic hitting supply chains.
We're talking bullet point number two above on steroids!
I know what you may be thinking: Wait a sec! Folks received all that money because of COVID, therefore COVID absolutely explains this big inflation spike!
Well, yes, but no! My point is that the world's capacity to produce goods before I could spell coronavirus was not remotely equipped to handle that level of stimulus, nor what's yet to come.
I.e., the "system" simply does not possess the capacity to produce what populist forces, clean energy mandates, etc., going forward will demand of it. And the Fed -- much like the 1940s (the last time the US government's debt load exceeded the size of the economy) -- does not have the green light, let alone the will, to tackle the resulting inflation with consequentially higher interest rates!
Not to say that rates won't -- post pandemic pressures -- settle at levels higher than we're presently experiencing (in our opinion they will), they just simply can't rise to a rate that will effectively quell (à la the 70s) what ultimately looks like an inflationary perfect storm.
Now, no small number of economists would tell you that this all paints a very near-term bullish picture for the economy, and for the equity market; as of course that stimulus money is still sloshing around the system. and, not to mention, US consumers presently sit on some $2+ trillion in their savings accounts. Taking these factors in isolation, that bullishness is justified.
Thing is, while the Fed is ultimately obsessed with not destroying the wealth effect folks feel when they see their rising 401(k) statements (loaded up with stocks) and how they're loving the sudden bulge in their home equity, half of their mandate has to do with maintaining "price stability" -- as in the price of goods and services (as opposed to the price of stocks) -- within the economy.
Well, clearly, they're not presently fulfilling that half of their mandate!
So, our 1940s analog notwithstanding, they'll indeed take a stab at it: First by gradually reducing their monthly bond purchases (with the goal of getting to zero early/mid-next year), then, if that doesn't crack the markets, by nudging up the Fed funds rate, a quarter-point at a time, until they do.
The question being, how much air are they willing to let out of these markets before they themselves panic and restart what are ultimately -- in an environment of heavy government spending -- inflation producing measures?
In closing, suffice to say that we've sufficiently broad-brushed (including detailed historical analogs) the inflation topic herein over the past several months. So, rather than filling our year-end note with content we've already covered, we'll succinctly focus the remainder of our year-end message on the key elements of our overall longer-term thesis.
Stay tuned...
Posted by Marty Mazorra at 9:04 AM