In Monday's morning note I suggested the following:

"...when it comes to "headline" CPI, we may see very little, if any, relief, even in the monthly number, given that energy prices ramped higher in June. The "core" number, which excludes energy, is more likely to reflect any recent letup in inflation."

Well, suffice to say, we did not see "any relief" in the headline number. In fact quite the opposite:

Remarkable! A headline 9.1% increase is the highest seen since 1981.
Now with regard to core, which I suggested would reflect "somewhat of a taming of price pressures of late," the annual rate did reflect that sentiment (albeit barely):

However, it's that orange line I bolded that throws cold hot water on that sentiment. That's the month-on-month number that I said was the telling one to watch. And it's telling us that the components in the core measure did not (as I wrongly anticipated) let up in June.
Now, traditionally, the Fed's focus has been on the core -- which excludes food and energy -- however, real people spend the bulk of their money on, you guessed it, food and energy. And it's real people's expectations that has the Fed's attention these days, and it's real people's sentiment that has the politicians' attention, always.

Equity futures are appropriately selling off as I type. I mean, given the shock of these numbers, and the support this gives for the Fed to go .75% at this month's meeting, we should expect nothing less. In fact, suddenly, Fed funds futures are pricing in 30% odds of a full 1.00% hike this month.

Now, let's take a step back -- and, by the way, recall that we are in the inflation will be higher for much longer camp -- and chart the truly troubling items, and consider the fact that the inflation data was collected via thousands of calls on thousands of businesses throughout the entire month of June.

I red-Xed June 15th on each graph:

So, as you can see, the trend for the second half of June strongly suggests July's month-on-month headline number is going to come substantially off the boil. Assuming that trend continues, that is...
Indeed, today's number gives cover for the Fed to go .75% this month, but, my -- while I get that they got themselves way behind the curve -- they have to be uber careful attempting to get ahead of a curve that may already be rolling over. Which is certainly the case with regard to overall economic growth, per our assessment:
PWA Index 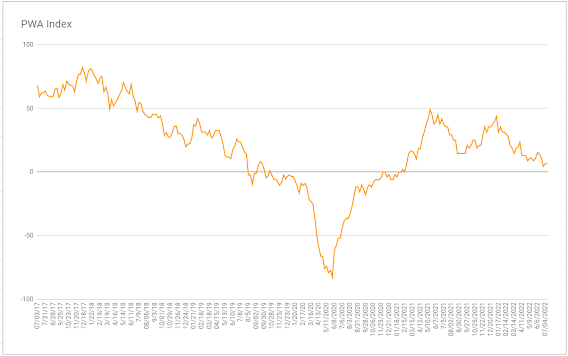 At the end of the day -- and keep this fully in mind -- as I continue to illustrate, our analysis says things get worse before they get better. So, lower stock prices right here, and going forward, whatever the reason, should come as no surprise to regular readers.
Next up, our weekly stock market (video) snapshot.
Stay tuned...

Asian leaned red overnight, with 9 of the 16 markets we track closing lower.

Europe's significantly in the red so far this morning, with 17 of the 19 bourses we follow trading down as I type.

Among our 38 core positions (excluding options hedges, cash and short-term bond ETF), 7 -- led by energy stocks, ag futures, AMD, silver and base metals miners -- are in the green so far this morning. The losers are being led lower by Disney, materials stocks, Sweden equities, uranium miners and financial stocks.
As we ponder present conditions, assess their meaning in the grand scheme of things and consider what they portend going forward, let's never lose sight of the fact that:

"...the swinging of conditions from one extreme to another in a cycle is the norm, not the exception."

--Dalio, Ray. Principles for Dealing with the Changing World Order

Posted by Marty Mazorra at 7:12 AM