Schwab's Jeff Kleintop points out the extremely positive breadth (my highlight below) in global corporate earnings, which speaks to the general health of the global economy as well as the generally bullish equity setup (we've been illustrating herein) going forward:

Ever get the feeling that we've been here before? For investors, the sense of déjà vu may be coming from corporate earnings. The analyst consensus estimate for earnings per share over the next twelve months for the world's companies (measured by the MSCI All Country World Index) has risen back to $30 again for the fourth time in 10 years, as you can see in the chart below. 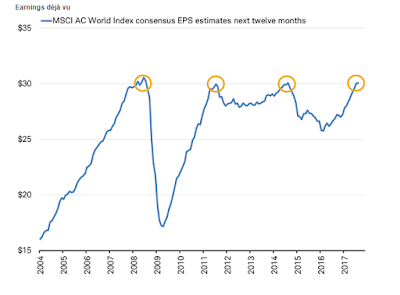 Since first reaching this level in 2008, earnings per share for the world's companies has taken about three years to return to $30 after each decline. Despite the similar three year intervals, each decline in earnings was unique with differing depths and drivers.
Interestingly, the regions that lifted earnings to $30 have also been different each time, as you can see in the chart below (all regions' earnings per share are indexed to 100 at the start of 2004 to make the comparisons easier).
Posted by Marty Mazorra at 7:23 AM