The good news may be bad news, which, if it is, makes it good news!

You see, sentiment is a tricky thing on Wall Street. Two important components of the PWA Index (the new name of our scored weekly macro analysis) are the individual investor and investment adviser sentiment surveys. While bullishness is a good thing, too much of a good thing -- particularly while other things are deteriorating -- is a bad thing.

It is no exaggeration to say that analyst' bullishness coming into this earnings season is virtually off the chart*. 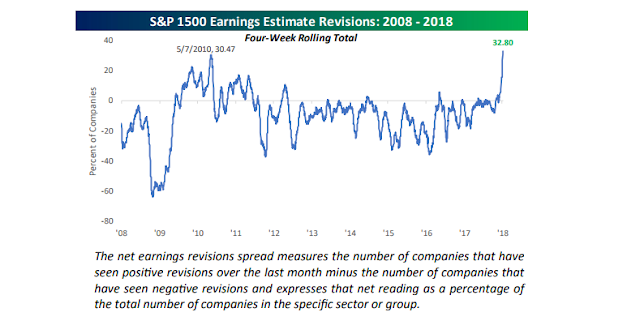 And we'd say with good reason. If you read our year-end letter you know that our analysis suggests that conditions presently remain conducive to strong corporate earnings growth. Add the pending boost therein brought about by the new corporate tax structure and you have the makings of exceptionally good forward guidance.

Now for the "bad" news: Four of the seven times the revisions spread (difference between positive and negative earnings estimate revisions) during the present bull market was positive the S&P 500 actually ended the earnings season in the negative (by as much as 8.9%). Which is exactly how many times the index traded lower when the revisions spread was negative. Problem is, it was negative 28 times during the present bull market.

In other words, when the revisions spread was negative, stocks made earnings season gains 86% of the time. When it was positive, as it is now, stocks gained only 43% of the time! 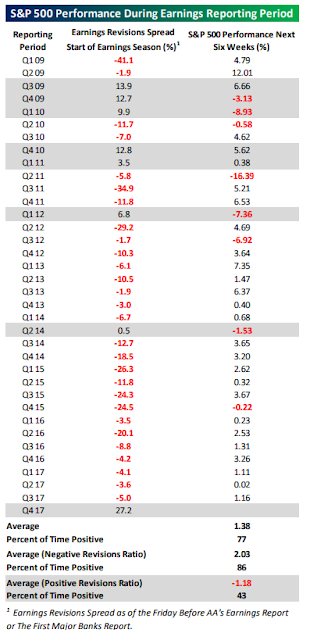 So why would I rain on anyone's parade?  I mean, given the backdrop, isn't it likely that this time the market will indeed buck the previous trend? Sure, that's very plausible. But here's the thing folks, if a decline in stocks over any six-week, or six-month for that matter, period during an ongoing bull market equates to raining on your parade, well, for one, you've been dangerously lulled to sleep by last year's volatility drought, and, for two, if this bull market has much more to run, it'll absolutely need to take a breather (read correction) every now and again. Which means if the good news is "bad" news (and we get some rain), it's good news!
Posted by Marty Mazorra at 6:13 PM