As good as it feels to credit one's favored factor(s), development(s), person(s) or political party, the truth is that the market dynamic you and I are presently experiencing is a global affair.

Here's the chart where we track performance for the U.S., the Asia Pacific region and the Euro Zone, along with developed non-U.S. markets and emerging markets in their respective aggregates:

While, as you've noticed, the U.S. market has started the year like gangbusters, it (orange line) is still bringing up the rear among global gangbusters.

I say "still" because that was the story throughout 2017:

Of course no one here is complaining, as our foreign equity targets make up a healthy percentage of virtually every client's portfolio.

Part 4 of our year-end letter explains in full detail why we continue to maintain those "healthy" weightings.

Again, the year is starting off strong for the equity investor of the world. And while, as we've illustrated, a bullish macro setup remains, we fully expect a markedly greater amount of volatility this year versus last.

In fact, while the S&P 500 has posted a very nice 0.59% gain to start this holiday-shortened week (the Dow's up 1.21%), the S&P 500 Volatility Index (VIX) -- which tracks the implied volatility embedded in the pricing of S&P 500 index options -- is up a whopping 17.22%. What that simply means is that options traders are betting on higher volatility going forward (which, by the way, was a profoundly losing bet last year):

Should the prospects for increased volatility bother you? Well, frankly, if it does you shouldn't bother being in the stock market. Trust me, last year was an historic exception!

On a wonkier note, clearly the crowd is excited about the market implications of the new corporate tax regime and prospects for more stimulus (read infrastructure) to come. A friend reached out to me yesterday with an inquiry about the potential for a market correction when "the Fed starts selling off its inventory." What my friend is referring to is the $4+ trillion of treasury debt and mortgage backed securities the Fed acquired while it presumably saved the system from the 2008 great recession. I cleaned it up and devoted the bulk my reply to yesterday's entry to our internal market journal, which I'll share below.

While the following pours a little cold water on the current (future, actually) market/economic state of affairs, understand that we're simply assessing the potential ramifications of what's being thrust onto the investment landscape. To repeat, for the moment conditions remain bullish:

Right now they're rolling off around $10 billion per month (i.e., allowing it to mature without reinvesting the proceeds). That's how they expect to whittle it down. They'll increase that amount to a max of $50 bill/mo in the months going forward. At that pace it'll take 6.5 years to get the inventory back to pre-recession levels. Along the way they'll need to raise interest rates as well.

In terms of the market correcting, we're definitely overdue as we speak, so it'll happen in 2018, several times I suspect. Whether or not the popular narrative will "blame" the Fed will remain to be seen. They (the Fed) definitely need to put themselves in a better position between now and the next contraction. If I were on the board I'd vote for stepping up the tightening now, given the acceleration in the economy.

The problem with the tax reform and other fiscal measures to come, from an economic standpoint, is that we don't need them right now, and, thus, spending what looks like a great deal of fiscal ammunition is going to leave Washington hamstrung come the next recession -- (which would be the ideal time for tax cuts, etc).

Compound that challenge with the fact that all of the stimulus will likely serve to pull forward activity that otherwise would've occurred over a longer stretch of time, thus bringing on the next recession sooner than what the pre-stimulus setup might've called for. All the more reason why the Fed needs to get more aggressive now, now that they have the opportunity; which, per your question, will provide a convenient excuse for the volatility to come.

Moving on, beyond the stimulus-induced stuff we'll be dealing with going forward, we're halfway through the month and the titles of the stuff we've stuffed into our January current trends file supports, on balance, the general bullishness dictated by our present macro analysis. You'll find those titles below.

As always, shoot me an email if you'd like to see the data that supports any of the headings. 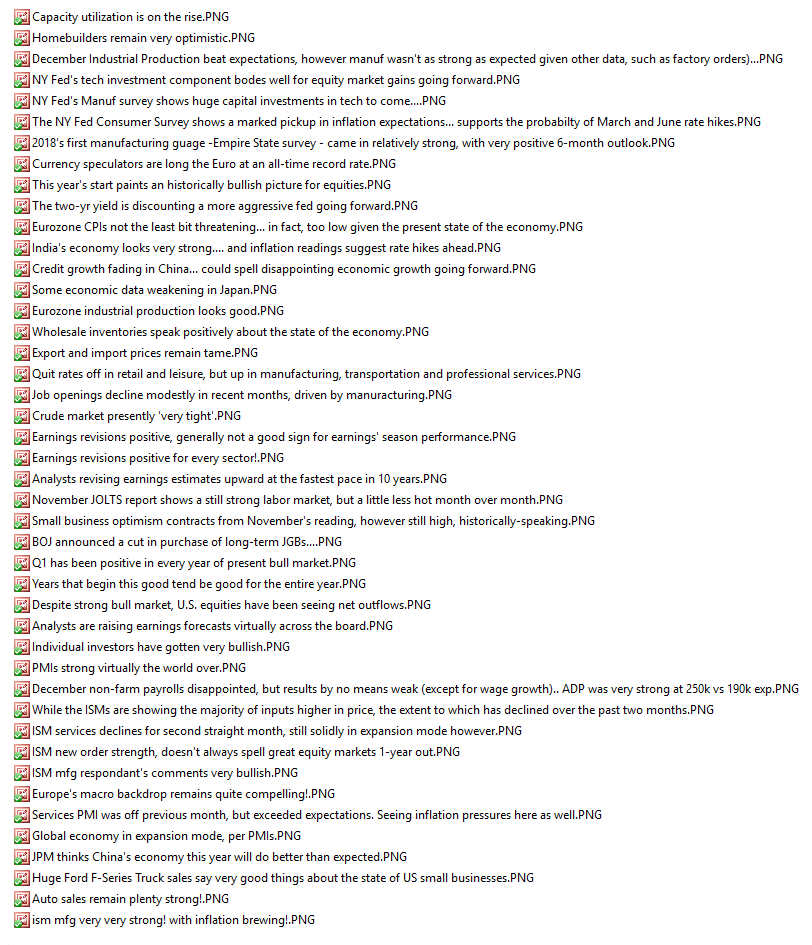 Posted by Marty Mazorra at 6:35 AM