A 'Fundamental' Silver Lining To A Volatile Market

If you're our client financials is presently your portfolio's top sector weighting. We outlined our bullish thesis in our 2017 year-end letter. Per point #5 in the excerpt at the bottom, we saw market volatility in 2018 as a distinct positive for the sector's earnings prospects. 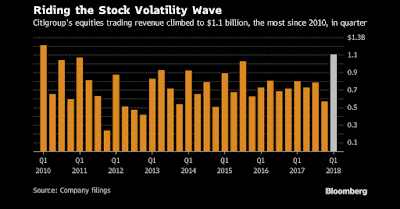 Citigroup Inc. is profiting from Donald Trump’s unpredictable presidency. Wild stock markets through the end of March -- spurred by Trump’s tweets on global trade -- helped the firm’s equities business generate the most revenue since 2010, handily surpassing a $1 billion mark the bank said just weeks ago might be within reach. That made up for a surprise drop in fees from handling fixed-income products. Overall, profit beat analysts’ estimates in the first quarter.

The financial sector stands to benefit from a number of potential developments in 2018, including the following:

1. Prospects for higher long-term interest rates amid a growing economy: Banks borrow on the short end of the yield curve and lend on the long (higher lending rates [relative to their cost of money] increase their net interest margin -- an important earnings component).

2. Prospects for deregulation: The President has made it clear that deregulation will be a hallmark of his term in office, plus, the incoming Fed Chairman has stated his intent to loosen financial regs.

4. Valuation: On a price to forward earnings basis, financials are second cheapest (to telecom) among the major sectors.

5. Trading volume: 2017 is about to go down as one of the least volatile years in market history. Thus, an important revenue source -- securities trading -- for major financial firms faced a real headwind for much of the year, as volatility equates to trading activity. While, as discussed in Part 2, we like the macro setup going forward, we believe that the likelihood of a repeat of 2017 (in terms of volatility [lack thereof]) is very low indeed. Thus, the prospects are decent for a pickup in trade-related revenue for the big banks going forward.

As suggested above, we are indeed presently bullish on financials. For now we're maintaining our base target of 18% of equities exposure (our presently largest weighting) -- with a bias to the upper end of our range (i.e., 18-20%)