This week's message to clients is my weekly note to our staff and associates. If you like getting into the weeds, by all means take it all in, if you prefer to cut to the chase, feel free to skip to the summary.

While the S&P 500 only declined 0.53%, there was some technical damage done sector by sector.


Financials, materials and industrials, after rallying strongly the week prior, suffered pull backs of 4%, 4.3% and 2% respectively.

As for financials, we can blame the flattening yield curve (market sees headwinds keeping long-rates at bay) and, purportedly, concerns over exposure to Italian banks.

Blame the rout in materials and industrials on heightened trade risks.

The Eurozone suffered under the weight of trade risks, as well as Italy's new populist regime's budget fiasco and the potential fallout among the nation's banks.

Energy stocks traded higher, +0.9% on OPEC's defiance of Trump's insistence that they can and should reduce oil prices, or else!

Interestingly, staples, utilities and gold all traded lower (-2%, -0.7% and -0.6% respectively) right along with the cyclical sectors (save for tech). I.e., last week did not see a rotation to defensive assets, as one might've expected. 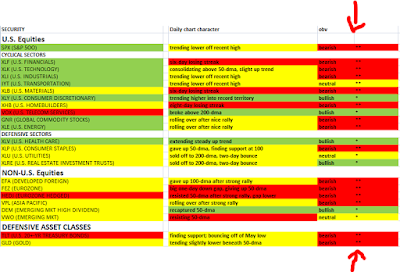 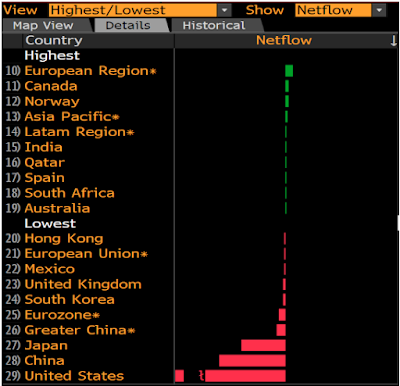 As for the Macro analysis, it wasn't anything to write home about either: The PWA Index dropped 5.95 points to 38.10 -- the lowest score of the year. The bulk of the decline occurred in the financial markets subindex, as several breadth readings gave way (the S&P Cap Weighted Index notably outperformed the S&P Equal Weight Index, S&P 500 members trading above their 50-day moving averages dropped to 58% [a neutral reading] from the low 70%s, and breadth readings among the sectors overall went from positive to neutral). There was a marginal weakening in the Financial Stress Index as CDS spreads went from positive to neutral (European banks primarily). The Economic Subindex declined slightly, as truck tonnage fell for the second straight month, and the Chicago Fed National Activity Index moved from positive into neutral territory.

As for equity markets; last week could've been far worse, given the ramp up in tariffs, the prospects for more, and very poor seasonality (the last week of September has been far and away the worst week for the market over the past 10 years). The next few weeks (leading into mid-term elections), are, at best, likely to see a notable pickup in volatility. At worst, a pullback in the mid-single to low-double-digit % range.

Q3 earnings reporting season is about to get underway, and we should expect a large number of firms to offer lowered guidance due to the negative impact of newly implemented tariffs, as well as the threat of more, going forward. In an already nervous environment, lowered earnings guidance is likely to be met with reactionary selling upon those announcements. That said, we could very well see some guidance optimism among consumer discretionary names due to rosy prospects for the retail season.

Bolstering the case for a near-term spike in downward volatility, the latest Investor Intelligence "advisors sentiment" reading came in at a dangerously high 60.6% bullishness (contrary indicator). That's the highest reading since January 18th; eight calendar days before the beginning of a swift 10% dip in stocks.

An offset to that last point is a marked move to cash (18-month high) among mutual fund managers (not crazy bullish like advisors) of late. That's considered a contrarian bullish sign and could provide fuel for potential dip buying. Plus, individual investor bullishness sits at a slightly below average 36.2% -- that's far from the frothy optimism that often precedes market downturns.

Not that stocks can't trade even lower (than the range mentioned above), however, given the still bullish macro backdrop (38.10 on the PWA Index is far from a get-defensive signal), the odds of a near-term recession and, therefore, a bear market (protracted period of steady declines [of 20%+]) remain notably low.

As for macro conditions; last week's decline in the financial markets subindex is in no way out of the norm, as it is inherently volatile. The financial stress subindex scores a very high (low stress) 81.8, and, as we've discussed, we are bound to see some weakness -- particularly in measures such as truck tonnage -- in the economic subindex due to some data letdown after the previous rush of activity as companies tried to head off pending tariffs as best they could. Yes, there was measurable anomaly in that 4.2% GDP reading.

All that said, we should not take the weakening of conditions too lightly. And, under no circumstances, should we try and explain away signs of deterioration as being simply transient, or the ultimately benign consequence of government policy manipulation (like the surge in auto sales, and the subsequent decline, pre and post the previous administration's "cash-for-clunkers" head fake). In fact, given that the primary cause of the negative trend in macro conditions is the current environment around global trade -- and the entrenchment therein that seems to be taking hold -- we absolutely need to remain as watchful as ever, and be prepared to take appropriate actions should conditions roll over sooner than present trends would otherwise suggest.
Posted by Marty Mazorra at 9:08 AM