The Fed On What Lies Beneath -- OR-- Who Hires Whom?

Last month I devoted several blog posts to the recently released International Monetary Fund's (IMF) Global Financial Stability Report. As I expressed, the report confirmed virtually all of my concerns over what lies beneath; i.e., what will surface during the next economic contraction.


"While easier financial conditions have supported economic growth and helped contain downside risks to the outlook in the near term, they have also encouraged more financial risk-taking and a further buildup of financial vulnerabilities..."

"The search for yield in a prolonged low-interest-rate environment has led to stretched valuations in risky asset markets around the globe, raising the possibility of sharp, sudden adjustments in financial conditions. Such sharp tightening could have significant macroeconomic implications..."

Last week the Fed released its own semi-annual financial stability report. Now keep in mind that the Fed has a mandate, which in essence is to do whatever it takes to prolong U.S. economic growth. One of its stated tools, believe it or not, is "guidance". I.e., say things that make consumers feel comfortable with the economy, or, since the mandate is essentially to promote financial stability, never say anything to the public that might have them thinking the future is financially unstable. In a nutshell, under no circumstances will we ever hear the Fed forecast an economic downturn.

With that out of the way, here are a few snippets from last week's report. The Fed's need to instill confidence notwithstanding, and while there is, therefore, a good dose of sugar-coating in the report, they do touch on the vulnerabilities that trouble me. The red type below captures the risk, the green captures the sugar-coating:


Asset prices remain high in several markets relative to income streams. However, risk appetite measures that account for the low level of long-term yields on U .S . Treasury securities are more aligned with historical norms for most markets. With the exception of riskier corporate debt, commercial real estate (CRE), and farmland markets, these measures point to a reduction in risk appetite from the elevated levels of 2017 and 2018.

Borrowing by businesses is historically high relative to gross domestic product (GDP), with the most rapid increases in debt concentrated among the riskiest firms amid weak credit standards. By contrast, household borrowing remains at a modest level relative to income, and the amount of debt owed by borrowers with credit scores below prime has remained flat.

Business debt levels are high compared with either business assets or GDP, with the riskiest firms accounting for most of the increase in debt in recent years. By contrast, household borrowing has advanced more slowly than economic activity and has been heavily concentrated among borrowers with high credit scores.

Figure 2-2 shows the credit-to-GDP ratio separately for the household and nonfinancial business sectors (leverage of financial firms is discussed in the next section). Before the crisis, household debt relative to GDP rose steadily to levels far above historical trends. After the crisis, the household debt-to-GDP ratio fell sharply and has leveled off since then. Business borrowing tends to track the economic cycle more closely. After the crisis, the business debt to-GDP ratio also fell but has expanded significantly over the past several years and is now near its historical high. 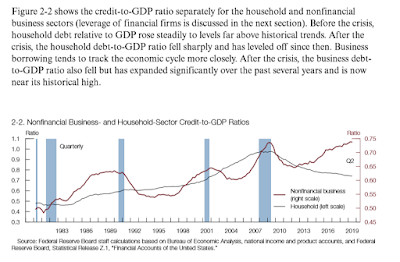 ....about half of investment-grade debt outstanding is currently rated in the lowest category of the investment-grade range (triple-B)—near an all-time high. The volume of debt downgraded from investment grade to speculative grade in 2019 has been close to the average over the past five years. However, in an economic downturn, widespread downgrades of bonds to speculative-grade ratings could lead investors to sell the downgraded bonds rapidly, increasing market illiquidity and downward price pressures in a segment of the corporate bond market known already to exhibit relatively low liquidity.

...demand for institutional leveraged loans has remained strong and credit standards have remained weak . The share of newly issued loans to large corporations with high leverage—defined as those with ratios of debt to earnings before interest, taxes, depreciation, and amortization greater than 6—exceeds previous peak levels observed in 2007 and 2014 when underwriting quality was poor (figure 2-5). Incoming data point to continued strong issuance of leveraged loans in the third quarter of 2019. However, the credit performance of leveraged loans has been solid so far, with low default rates...

This last snip below pretty much sums it up (*although in a bit softer language than I might choose), and justifies why, as long as our assessment of general conditions is suspect (increasing odds of an economic slowdown on the horizon), we remain cautious.

If the economy were to slow unexpectedly, profits of nonfinancial businesses would decrease, and, given the generally high level of leverage in that sector, such decreases would likely lead to financial stress and defaults at some firms. Investor risk appetite and asset prices may decline significantly in such a scenario, especially in markets such as high-yield bonds and CRE, where valuations are elevated. In addition to generating losses for the holders of the assets, a decline in asset prices could affect the financial system more generally either by impairing the ability of some financial institutions to lend or by inducing a wave of selling and redemptions of withdrawable liabilities.

Bottom line from the Fed, the consumer's in decent shape (and I agree), but companies ultimately (in a downturn) may not be (aren't!).

Question: Who hires whom?

Posted by Marty Mazorra at 8:55 AM