Wow! At 12:48pm pt this afternoon U.S. stocks literally rocketed higher. I'm looking for a headline, or a tweet, but -- other than the conspiratorial tweets suggesting that the PPT ("Plunge Protection Team" [alleged government operatives]) are at it again via their supposed proxies -- I don't see any. 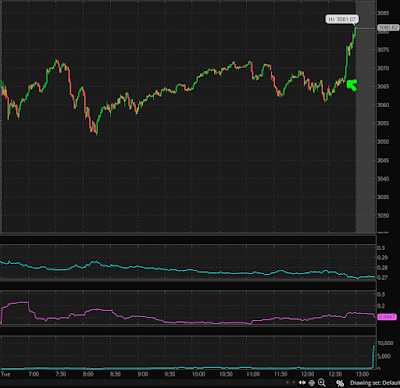 So what just happened?!?

Well, actually, by definition, a crowd of buyers stormed the market, only to meet up with some stingy sellers. Now, why, amid what we know about the present state of world affairs, is, well, a mystery, I suppose...

I mean, what would inspire what amounts to a buying panic to occur at 12 minutes before the market close on an afternoon when New York City has mandated an 8pm curfew?

To deepen the mystery, my wife just texted me the following:

These retailers are permanently closing stores:

Trust me, the list of concerning headlines is legion. Here's one I just saw while circling back to see if there's a 12:48pm gem that explains today's bounce:

Short covering? Sure, but typically I can locate an upside "catalyst".

So we'll just go with the simple truth; buyers rushed in (for whatever reasons) and sellers made them pay (up).

In any event, as many a market actor continues to declare, "this is insane, we've never experienced anything like this!"

(This one's busy, and rich with signals, so I'll include it in a future video and properly explain)...  click to enlarge...

The thing to note about the S&P's daily rate of change, save for the '87 crash (one of the 4 inside a clear rectangle [the only one occurring outside of recession]), is that such extreme moves tend to cluster for extended periods of time (particularly during recession) and in no instance (even in '87) do you see the initial peak not get challenged, or overcome, or the initial trough not see at least a better than 50% retracement; other than in 2020 thus far.

So, while we indeed live in unusual times, when we consider the history of stock price-movement it appears as though we may be living within a bear market that has yet to run its course...

Posted by Marty Mazorra at 5:22 PM