Our proprietary macro index continued its upside breakout this week, adding 8.17 points to its overall score, which now sits at +14.29: 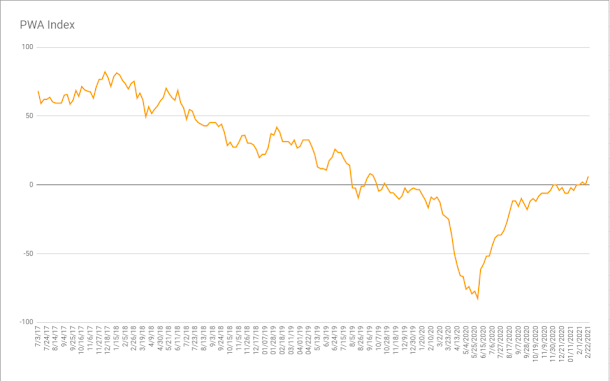 Presently, 43% of our inputs score positive, 29% negative and 28% neutral.
Of course the caveat remains, were it not for literally $trillions of government injections, we'd be struggling through an historically deep recession. Of course the hope is that the real economy will, sooner than later -- given all the "assistance" -- regain its legs, and essentially stand on its own... Time will tell.
We'll save for another day our discussion of the prospects for the economy making sustainable strides while the corporate sector (not to mention the government itself) piles on more and more debt...
4 of our inputs moved the needle positively this week, 2 negatively.
The positives:
Consumer spending (read $600 stimulus checks):

So, a bit of mixed messaging there.
While the increase in heavy truck sales was modest, it was nevertheless enough to take the indicator from negative to neutral in our scoring. The mixed message there comes from the continued rollover we're seeing in rail traffic.
As for the consumer, we see income and spending rising, but mortgage apps notably rolling over. The former denoting optimism, the latter (of course interest rates have been rising) concern.
So let's pull in some other consumer-related inputs and see if we can't draw a conclusion...
Personal Savings Rate (a rise denotes concern):

Wow! Americans saving 20.5% of their disposable income! Who would've ever imagined?!?
Consumer Confidence:

Hmm....
While, for sure, we should expect a surge in services, leisure and hospitality spending once things really open up, there's, nevertheless, real evidence that folks may not be quite as giddy about the notion as, say, Wall Street might have us believe.
Stay tuned...

We saw a nice rebound today in tech stocks, after a rough few days. As for the rest of the market, however, if we take tech out of the mix -- oof! -- the selloff continued, unabated. Which is interesting because the perceived culprit in this overall messy week -- rising interest rates -- rolled over hard today (which explains the rally in tech).

I'm thinking maybe the dollar had something to do with today's unintuitive action.
Recall my preaching all the way back to mid-2019 that, given the state of general conditions (then and now), a higher-trending dollar presents a serious headwind for financial markets.
Here was the dollar today:

That's big!
So, again, while our tech sector ETF had a nice day (+0.53%), it was one of only two core holdings that closed in the green (the other being our small position in solar stocks).
To get a feel for how rough the session was for the rest of the market -- healthcare was the best of the rest, and it was down 0.85%. The worst was miners, down 4.12%. You'd think good old safe utilities, being so interest rate sensitive, would've had a stellar day (as rates plunged), but nope, they were down 1.85%.
Meanwhile, 23 of the Dow's 30 members closed lower (the Dow itself was down 469 points). 68% of the SP500's closed lower as well. And even though the tech-heavy Nasdaq Composite finished in the green by 0.56%, 63% of its constituents also ended the day in the red.
Volume was notably above average, which is something you don't want to see when, across the New York Stock Exchange, down volume bested up volume by 3-to-1.
Bottom line: As we've been reporting herein, there are clearly actionable longer-term themes to be exploited in today's unique market setup, but like I said Wednesday, expect huge volatility going forward!
Have a nice weekend!
Marty

Posted by Marty Mazorra at 4:20 PM