There’s literally zero doubt in my mind that we are in a classic stock market bubble, particularly in the high flying growth names; Tesla stands out, to put it mildly.
Now, that's "my mind" I'm talking about. Clearly, much of Wall Street, and most of Main Street, disagrees with me. And, frankly, being in a bubble does not mean that there are no legitimate opportunities to exploit in markets... It's all about how you go about it...
But here's the thing (actually, one of many "things"), my minority mindset notwithstanding, the fact that the stocks of companies that literally make no money as a group are trouncing those that do -- while one might deem it forward looking -- is (in my humble opinion) fundamentally nonsensical, and reminiscent of the days when traders fantasized that anything with ".com" in its name would ultimately make a killing... Well, the vast majority ultimately got killed, literally...
Rosenberg Research charts its own "non-profitable" equities index: 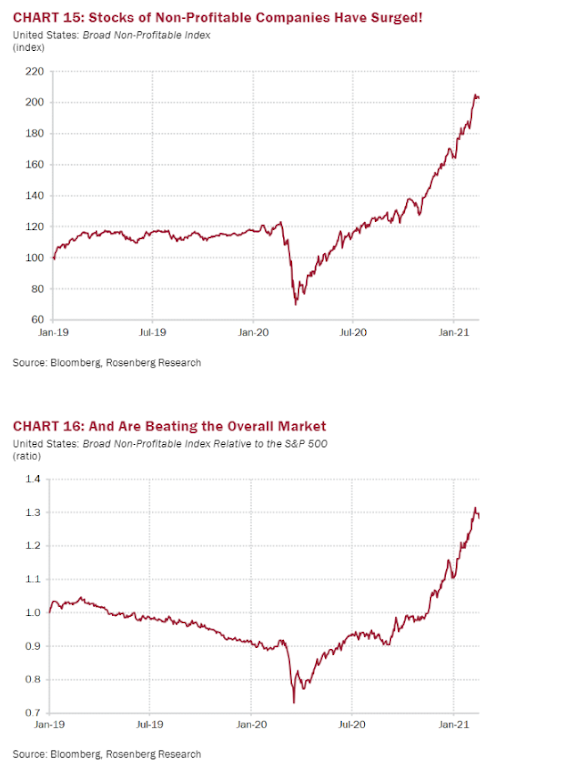 Incredible!!
Now, mind you, all that said, as history has proven, bubbles can stay afloat for a very long time.
Of course the longer this one goes, the closer we are to its end, however, the Fed and the treasury (Janet Yellen) are hypersensitive to the reality that should the equity market pop, the very fragile (government sponsored) economic recovery is going to pop with it.

Hence, we are about to see, far and away, the greatest coordinated assault on recessionary conditions, on financial market risk, and, frankly, on capitalism, the world has ever seen.

A nearly $2 trillion “stimulus” package is about to be passed, followed later in the year by a several (likely ~3) $trillion infrastructure plan.

While the prospects for fiscal spending sounds bullish for equities, given, among other things, what was a primary driver of stocks throughout the longest bull market in history, there’s serious risk in that narrative.
I.e., I'm in the camp that believes that the coming epic combination of fiscal spending and monetary easing (involving the Fed buying up the treasury issuance that’ll fund the fiscal largesse) will spark a potentially not-small round of inflation that will naturally do a real number on the bond market; read higher interest rates!

The fact that the equity market has feasted on historically low interest rates, and that present valuations can only be justified by, yes, historically-low interest rates, means that those high growth names’ in particular will simply not hold up against a rising discount rate.
Note the action in Apple vs the 10-year treasury yield:

And, speaking of not holding up against higher interest rates, consider the ramifications on the following:
Total U.S. Federal Govt Debt:

Well, of course, this all leaves the Fed in quite the pickle. Their duo mandate includes keeping inflation steady, which means it’s their job to tighten monetary conditions (read hike interest rates) as inflation accelerates past a certain point.

Of course we know that ain't going to happen: J. Powell has made abundantly clear that they “aren’t even thinking about thinking about hiking interest rates.” The above charts vividly illustrate why.

Ah, but the Fed not hiking the Fed funds rate of course will not, by itself, keep interest rates down -- per, once again, the latest move in the 10-year treasury yield:

So, hence, the pickle (rates will rise anyway)! And, thus, the question: Will the Fed allow markets to collapse under the weight of rising yields, or will it step in with aggressive yield curve control and, in the process, push real rates (nominal yield minus inflation) deeply below zero? Which would involve either printing yet more money with which to buy bonds, targeting the long-end of the yield curve, or selling the short-end and buying the long-end (Bernanke’s “operation twist”), or both.

Make no mistake, given the systemic risk of rising nominal yields, they have literally no choice but to do one or the other, or both.

So then, how, on behalf of our clients, do we exploit the opportunities and hedge the risks inherent in this thesis?

We’ll (in diversified fashion [which includes cash and ultra-short-term fixed income securities]) emphasize the cyclical value plays that are destined to take the most advantage of what’s to come: Materials (including miners), industrials, financials & energy (including renewables) will be our top U.S. equity sector weightings. Commodities (including gold -- given the prospects for deeply negative “real” yields) are a no-brainer. And non-US equities represent unusual value amid what virtually has to be a weak-dollar environment (on a trend basis) well into the foreseeable future.

As for hedging against what will remain real downside risk -- while our commodities weighting (nearly a fourth of our core portfolio), gold in particular, could help mitigate potential equity market downside -- actively hedging with options (which worked beautifully for us during last year’s 35% selloff) is an absolute must under present conditions…

In contrast to the previous administration, who aggressively slashed corporate taxes, deregulated industry and was exceedingly stock market centric, the present administration’s platform sits in diametric opposition -- at least with regard to taxes and regulations.
Hence, I suspect sometime -- likely during the second half of this year -- the market will have to contend with the serious threat of higher taxes on corporations, on high-earners and potentially on investment gains themselves, as well as the prospects for increased regulations.

These will prove to be real headwinds pushing against the tailwinds outlined above…
Thinking immediate-term, it would be no exaggeration to characterize the latest market sentiment as euphotic. Our Fear/Greed Barometer currently scores +70, which denotes extreme greed. I.e., the bull side of the boat is hugely crowded.
Plus, the degree to which options speculation is fueling the upside is like nothing we've ever seen. I've heard it said that stocks have become a derivative of the derivative, and, for the moment, I can't disagree. I.e., as call contracts move closer to, and/or further into, the money, dealers are having to hedge (buy the underlying) in a big way, which is further exacerbating the upside. This is the definition of artificiality, and should sentiment abruptly change, and the mass's affinity turn to puts, the opposite can occur (dealers having to short the underlying), which could make for a swift, and dramatic, across-the-board selloff...
Summary:
While valuations, sentiment, positioning, rampant (bullish) options speculation, etc., have us checking virtually all of our bubble boxes, there nevertheless exists impressive growth prospects for certain sectors and commodities as government implements its huge spending  programs going forward, with the Federal Reserve accommodating it every step of the way...
The former demands that we actively hedge (mitigate big potential downside) our clients' portfolios, while the latter behooves us to position accordingly...
Thanks for reading!
Marty
Posted by Marty Mazorra at 12:44 PM