This Week's Message: The Fed, the Military, and the Housing Market

In this week's message we're going to jump around a bit.

For starters, I received inquiries pre and post yesterday's Fed announcement. Here was my response to a client who asked about how I saw the Fed meeting playing out and how it would impact gold and stocks specifically:

The consensus is that the Fed won't move on rates this meeting (odds have increased for December), and will announce that they'll cut the reinvestment of interest and principal payments from their existing portfolio (treasuries and mortgage backed securities) by around 10 billion per month. That anticipation (along with other supporting data), I suspect, is impacting the dollar and gold already (a tightening would be bullish for the dollar, bearish for gold). Stocks seem okay with those prospects in light of a generally positive setup overall (doesn't mean there won't be sentimental negative near-term reaction to the perception of Fed tightening). Historically-speaking, the Fed has a ways to go (in terms of tightening) to threaten the economy (and, thus, the equity market).


And the consensus was right on the money in terms of the extent of the rolloff and the absence of a rate hike. And the bullish dollar/bearish gold assumption was validated: 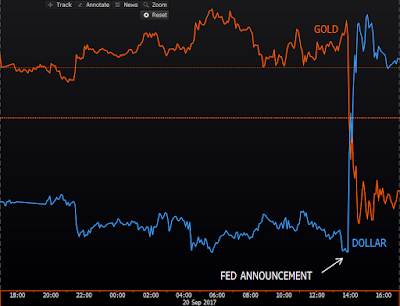 As for stocks, that dip on the news would be the sentimental near-term reaction I eluded to. And I wouldn't necessarily consider the strong snapback into the close as the end of the story. I.e., while we remain constructive on U.S. stocks going forward, we're way overdue for some healthy corrective action (read volatility): 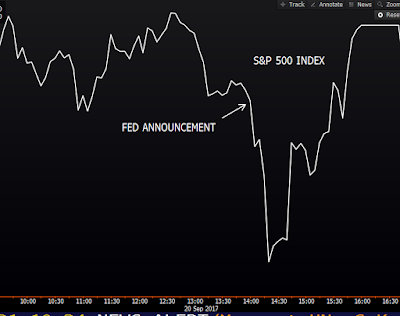 Here's my reply to a client who solicited my overall opinion on the markets in light of the Fed's stated objectives and strategy going forward:

It's going to be quite the task... The timing is about as good as it gets right now to get it started. They're testing the water with 10 bill per month. While it'll be interesting to see how fast market-driven rates rise going forward, at this stage of the cycle I believe we should expect essentially the same reaction (in equities, the dollar, gold, etc.) we'd see if it was a tightening via traditional measures (that is, just raising the policy rate). Basically, the rolling off the balance sheet inspires less aggressiveness on the fed funds rate... They're in essence balancing the two and hoping not to create too much of a headwind for the economy..

While we're overdue for some volatility, our research says we're likely a ways from the next recession/bear market... and I don't suspect the present Fed tightening stance will upset the applecart...

So, in a nutshell, no surprises at the moment in terms of market reaction to present Fed policy, and our macro view remains as is.

On another topic, we had some clients inquire recently about defense stocks -- for obvious reasons. In my response I featured the top 15 positions in the ETF we use for direct industrial sector exposure (presently an 18% of equities target). As you can see, you clients out there, defense contractors are part of your mix: 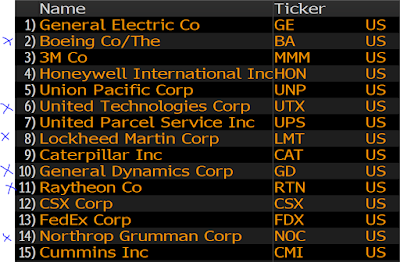 In that housing is a huge component in our consumer-driven economy, and the nexus of the last great recession/bear market, we'll finish up on that topic.

Every now and again, lately, a client will mention the housing market and suggest that another bubble's a brewing based on prices (in many venues) having reached or exceeded the old pre-bubble highs.

To add fuel to said client's fear, yesterday's existing home sales missed estimates; coming in at 5.35 million, which is notably off of the cycle high of 5.70 million reached in March.

Well, yeah, home prices, when you chart them, can appear ominous. However, no, "high" prices, by themselves, do not a bubble make. While we can talk mortgage securitization, lending standards, and such, the proof in the residential bubble pudding is to be found in the inventory statistics. And, again, no, we're talking anything but a bubble in housing.

Here's a look at the 17-year history of inventory of existing homes for sale along with the "months' supply" (ratio of houses for sale to houses sold). The 2006-2008 period is what a bubble in housing looks like:

Simply put, sales are down because there's so little for sale.

Of course that is a problem that'll be remedied by yet higher prices (demand/supply demands it) inspiring future sellers to enter the market. It'll be interesting to see if higher mortgage rates (that is, if the Fed's, and our, assessment is correct) going forward will light the fire.

Thank goodness they (higher rates) won't be bursting a housing bubble this go round...

Posted by Marty Mazorra at 7:25 AM