Quotes of the Day: Corporate Debt Is A Problem!

Grant Thornton's chief economist and I are on exactly the same page on this one:


"I have said it before, I will say it again. Corporate debt is a problem - this is an area the Fed has also voiced concern. Add the amount of junk bond debt outstanding and the overwhelming majority of corporate debt is now teetering of the edge of or at junk bond status." 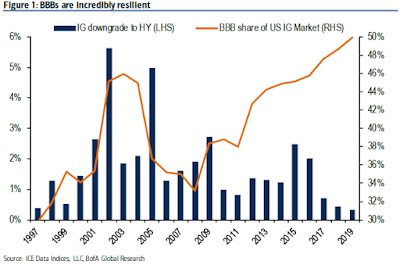 This following echoes my preaching over the past year:

"Corporate debt may or may not trigger the next downturn but could make it much worse. Companies who should have restructured during the expansion when their losses could be absorbed will be forced into more draconian cuts, which will exacerbate a downturn."