The Fed-Put Narrative, And My Problem With It

The overwhelming thesis among credible market actors is that the rally in stocks from September of last year to now is entirely about Fed liquidity and global central banks’ risk-aversion. And that there remains a very solid central bank put (with a strike price just a hair below current levels) that essentially pushes the next bear market past the foreseeable future, and that every dip remains a buying opportunity.

I’m in general agreement (save for the below caveat) with the consensus on what explains the September-to-now rally. There is, however, another element of the consensus thesis that I partially reject; which is the belief that the 19.9% selloff in the fall of 2018 was driven entirely by J. Powell’s commitment -- prior to the correction -- to normalize (raise) interest rates and to allow the Fed balance sheet to “runoff” to a lower level; a level more reflective of a "strong" economy:

What not a single one (who I'm aware of) of these worthy analysts has acknowledged is the fact that the market appeared to be consolidating, and basing, around 10% below its October '18 peak when it was announced that Canadian authorities, at the behest of the U.S. Justice Dept, arrested Huawei’s CFO (the daughter of its founder) just as Xi and Trump were in the midst of negotiating a trade truce.

In essence, I believe that the Q4 2018 selloff was exacerbated by trade war concerns, and that the latest rally has been sufficiently aided by their perceived alleviation (“Phase-One”).

Regardless, the pundit-majority seems all in on the bull market continuing well into the foreseeable future, and, frankly -- while they may be spot on -- I’m struggling with that notion…

For starters, it’s been my observation over the past 35 years that the consensus, when it’s this overwhelming, is wrong more often than it's right. Which may speak to the simple fact that when everyone’s crowded on one side of the boat, anything that sparks a mad dash to the other side tends to become exaggerated by the market response to the mad dash itself.

Now, of course my tipping boat analogy is not lost on today's bullish pundits, in fact such lopsidedness is something I'm certain they're on the lookout for as well. Thing is, many of them don't see it that way; they contend that the market is in fact not dangerously lopsided at present -- their evidence lying in the equity fund flow data:

Based on flows to equities from investors, lack thereof that is, clearly, according to the experts, we’re nowhere near experiencing the euphoria that typically spells the end of a bull market.

Here’s reference to that evidence in a January 9th CNBC article:


“Investment flow data shows that individual investors were largely net sellers of equities in 2019, even as corporate buybacks helped push the market to record highs. The lack of widespread participation suggests that the market hasn’t hit a moment of euphoria or “blow-off top” that often precedes a pullback. That will only happen when these investors finally capitulate and flow back into stocks on fear of missing out on more gains.

With the market “trading at fresh all-time highs, the investor participation has been light, and the bear capitulation is likely to have legs,” J.P. Morgan strategists said in a note to clients Monday.”

Of course that makes perfect sense, but, nevertheless, there are these other classic sentiment signals that suggest investors are indeed dancing in the (Wall) street. 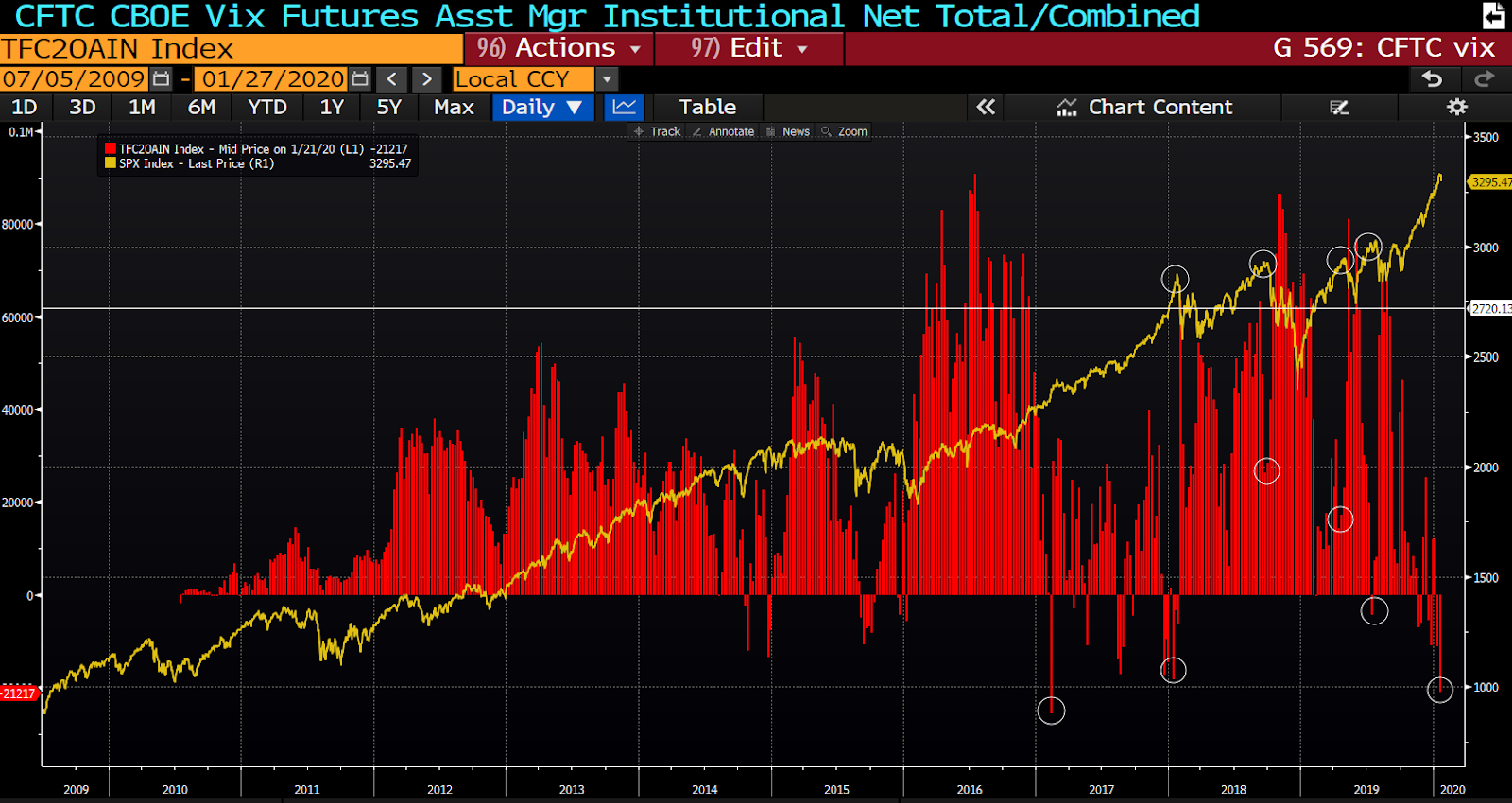 Investment Adviser Sentiment is currently in its classic danger zone: 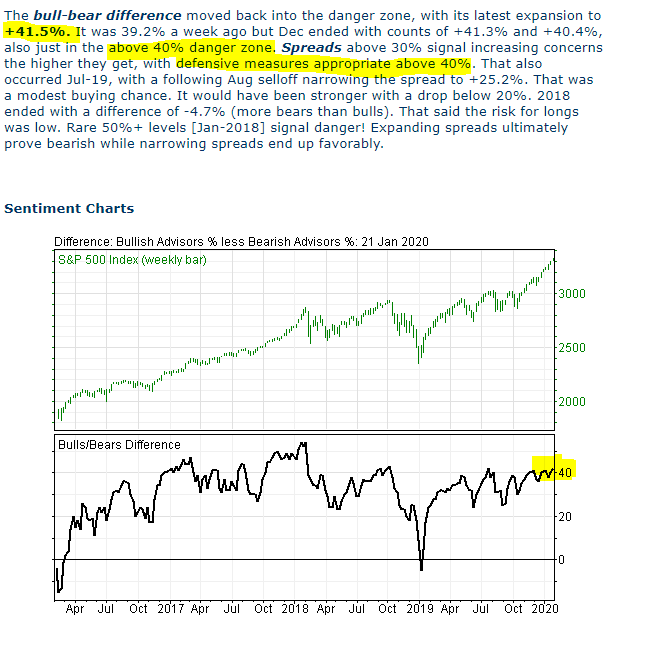 And while individual investors, aren’t quite in what I’d call the euphoric stage, they’re heading in that direction (of late): 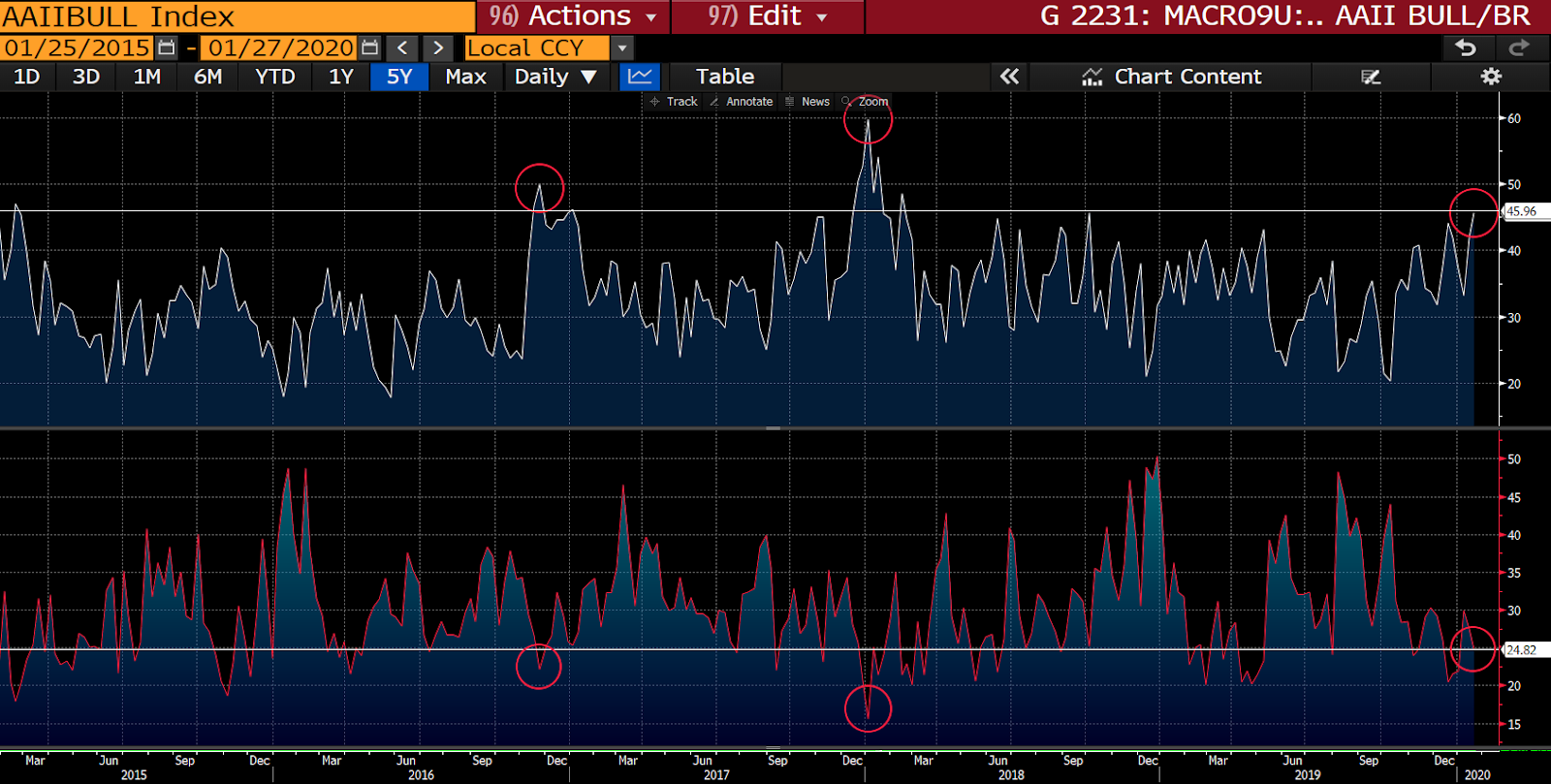 So, while I get the lack-of-equity-fund-flow narrative, other indicators suggest that either something's amiss, or those numbers are about to change in a hurry.

As for share buybacks more than picking up the slack left by traditional investors -- which, per the chart below, is an indisputable fact -- given the gargantuan (no, that’s not an exaggeration) debt burden companies have taken on to fund this largess, I can’t help but wonder how much longer it can last -- and what happens to the bullish narrative when all that largely debt-fueled buying begins to fade. 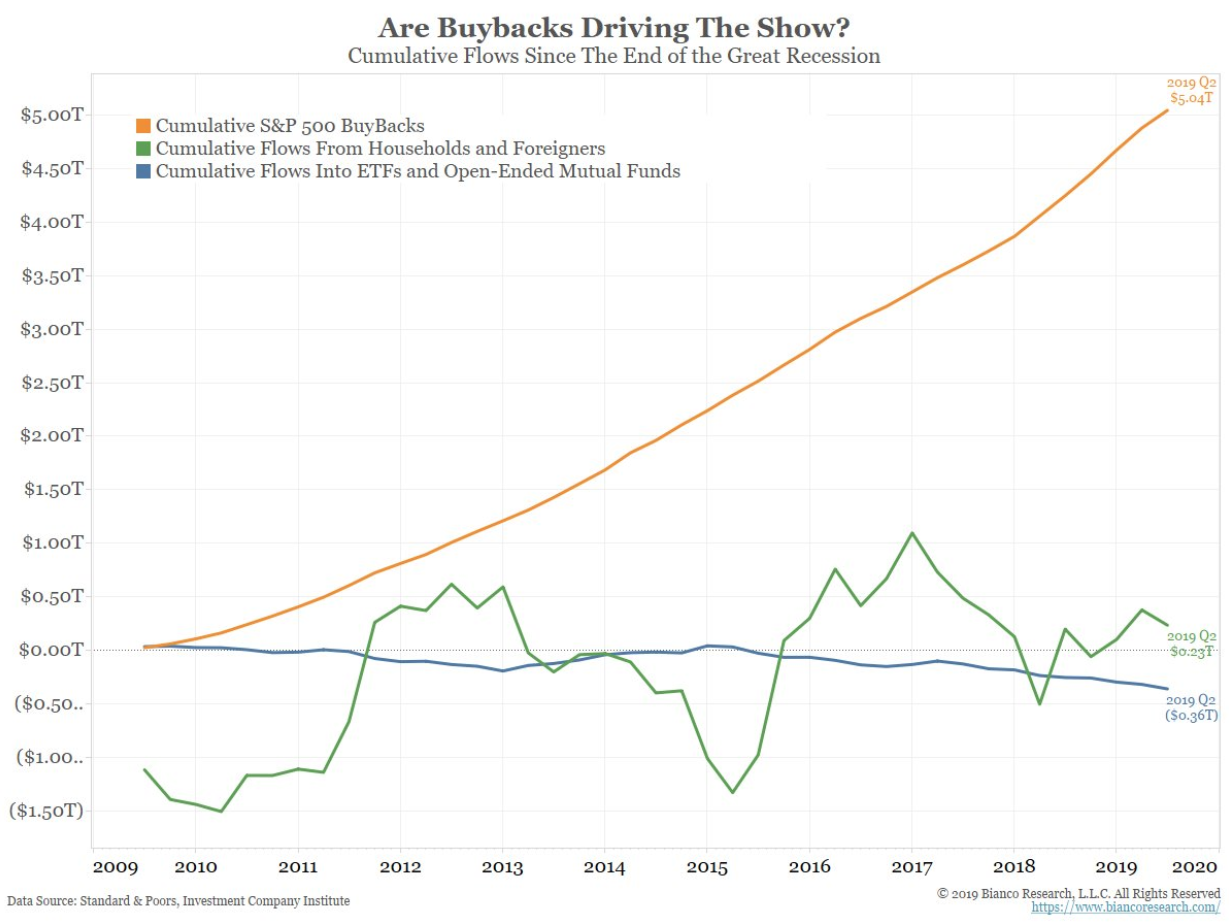 And here’s what it’s done to S&P 500 members' shares outstanding (yes, incredible, and, yes, much of the earnings/share growth we’ve seen during this bull market has been due to “financial engineering”): 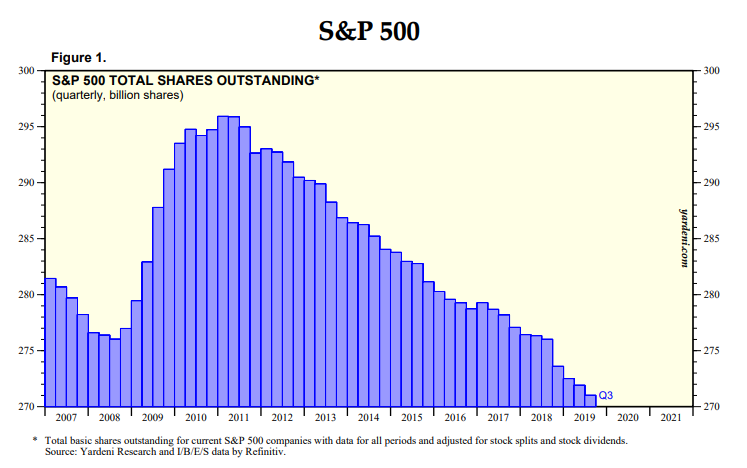 And here’s current US corporate debt to GDP, which doesn’t even begin to tell the underneath lack-of-quality story that continues to unfold: 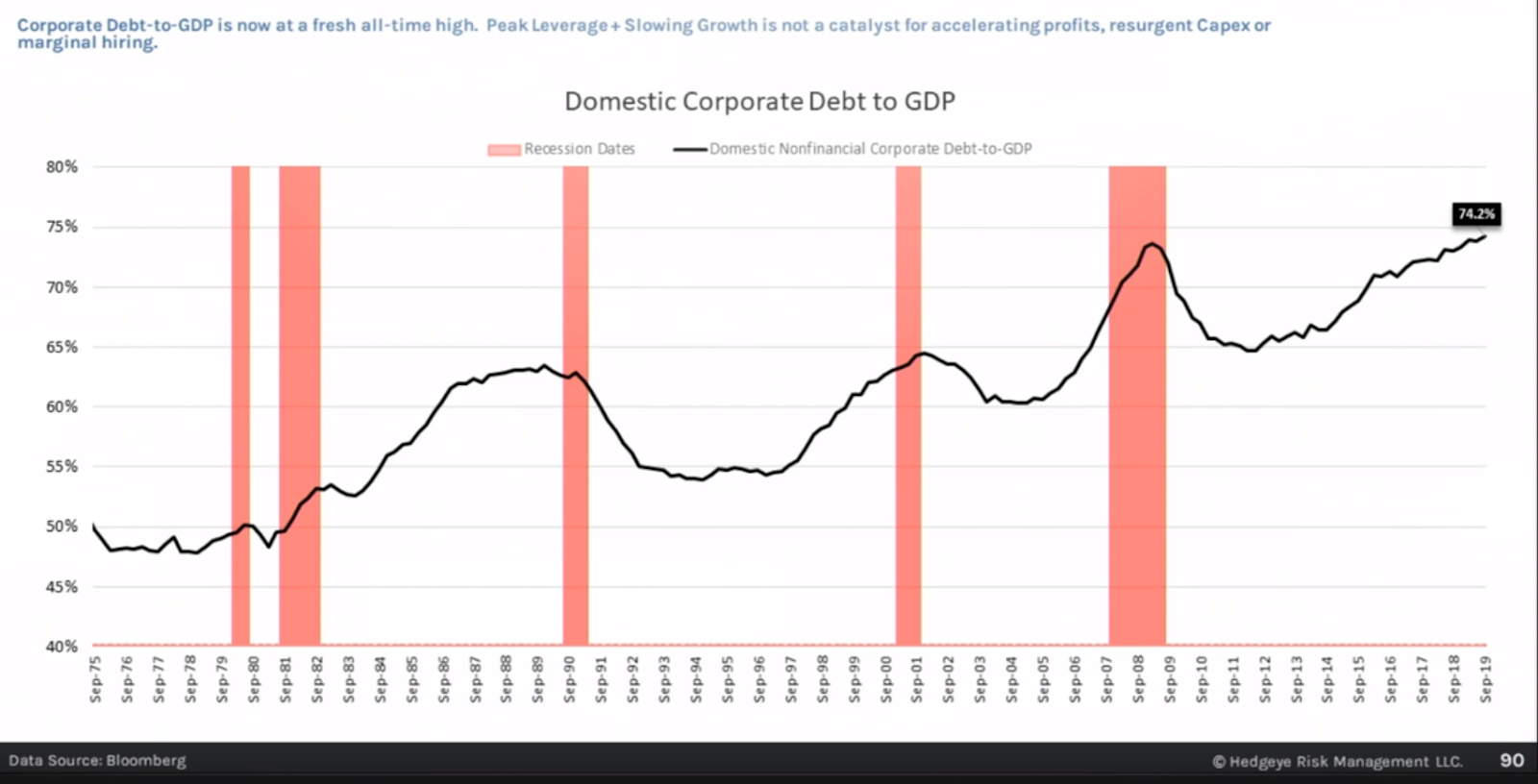 So, in summary, despite the case I laid out above, there’s little question that the consensus is -- for the moment -- on the right track: I.e., the Fed-put narrative likely keeps things afloat a bit longer.

My problem has to do with the extreme confidence, if not bravado (read carelessness), that exudes from that narrative, and, not to mention -- in addition to the above -- our own assessment of the current macro setup. And the fact that I’m growing more certain by the day that when this all ends, it’s going to end very badly -- I’ve seen this movie before!

Although, granted, the bull market's inevitably ugly epilogue could still be a ways off.

Sadly, however, the further central bankers and politicians can succeed in delaying the next downturn, the worse things ultimately get -- as their tactics can only make for a much harsher reality (a larger debt bubble to burst) when, well, reality strikes. And, alas, if indeed the pundits are right in terms of lack of participation to this point, a lot of unsuspecting investors are now getting sucked into the market at the absolute most dangerous phase of the cycle.


"You must be aware of what’s taking place in the world and of what results those events lead to. Only in this way can you put the lessons to work when similar circumstances materialize again. Failing to do this—more than anything else—is what dooms most investors to being victimized repeatedly by cycles of boom and bust."

Posted by Marty Mazorra at 8:55 PM