The calls for a 75bp fed funds hike this week in some circles are becoming deafening, despite the fact that Powell removed that one from the table last month. I suspect he’ll keep his word going forward and – assuming inflation remains slow to abate – opt for a longer string of 50bp bumps than previously expected.

But, then again, inflation has made the proverbial fools of the Fed this go-round, and is doing a serious number on consumer, and political, sentiment. So, who knows, perhaps the Fed will surprise to the upside – although I still give it less than 50/50 odds.

If indeed .75 is at all in the mix, I suspect he’ll (in Wednesday's presser) put it back on the table for future meetings.

The mere mention of a future 75bp hike will of course inspire a market adjustment, given its present hyper-sensitivity to the Fed.

With regard to underlying dynamics, there appears to be a significant amount of short-covering to come amid options dealers who’ll be unwinding their own hedges heading into and upon Friday’s expiration.

Given the accelerating level of bearishness around equities of late, options dealers positioning and, among other things, the number of SPX members trading above their respective 50 and 200-day moving averages, which just hit (notably low) levels that (contrarianly-speaking) tend to coincide with at least short-term market bottoms, it wouldn’t surprise me in the least to see markets stage a not-small counter-trend rally during the course of the coming week. Or, with regard to a boost from options dealer short-covering, early next week should the selling continue into Friday's session.

Now, that said, should, for example, the Fed deliver a resoundingly un-market-friendly verdict come Wednesday, that pent up buying demand could easily be met with overwhelming selling, and a further buying of puts in need of downside hedging among the dealers…

I.e., while it makes sense that immediate-term underlying dynamics point to the potential for something short-term special to the upside, there is absolutely no certainty that that’s how it’ll play out… And, regardless, after next week’s dust settles (up or down), we still see lower lows before the present setup plays itself out…

Now, speaking of sentiment, Bespoke Investment Group did a nice job of tackling the current setup with regard to consumer expectations around stocks and interest rates, and what history suggests portends for market results in the 1-month, 3-month, 6-month and 1-year time frames: 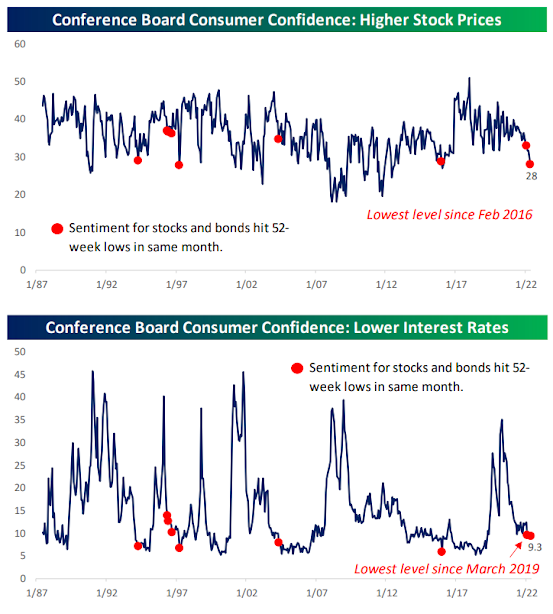 "With sentiment so weak towards both stocks and bonds, we were curious to see how they performed following those months when sentiment towards both hit 52-week lows in the same month with no prior occurrences in the prior year.
Starting with equities, of the six occurrences that fit the criteria (for the current period we used February since that was the first month where sentiment towards both hit a 52-week low at the same time), performance over the following month was positive five out of six times. Three months later, returns were more mixed with an even split between positive and negative periods.
Six and twelve months later, though, performance was consistently positive with gains in each of the five prior periods.
For bonds, performance was also positive but not as consistent to the upside as equities. On the right side of the table we show the direction of the 10-year yield, so declines indicate higher prices."

So, historically-speaking, this rare bearishness jibes with the contrarian nature of extreme sentiment readings. I.e., corrections and bear markets tend to bottom amid miserable sentiment...

That said, note that each of the previous 5 instances that saw similar sentiment setups occurred outside of recession, and of course at no time was the Fed facing remotely the inflation challenge it does presently. Nevertheless, it's worth noting, and it's not inconsistent with our present view (which is of course subject to change as the facts change) that odds favor (although they've been on the decline of late) that what we're presently experiencing are mid-cycle slowdown, rather than recessionary, conditions... Although, once again, we anticipate lower levels for stocks before the present setup plays itself out...

The good news of course is that it indeed will ultimately play itself out...

Today's action thus far is what you'd call "risk-off" by definition. Virtually every asset class, including bonds and gold is getting sold as I type. With regard to the latter, while indeed they, historically-speaking, tend do relatively well during deep equity market selloffs, in a scenario where traders are scrambling for liquidity, they sell what they got, regardless of its qualities, defensive or otherwise. It's when the dust settles that fundamental value emerges...

Asian equities were red across the board overnight, with all of the 16 markets we track closing lower.

Same for Europe so far this morning, with only 1 of the 19 bourses we follow in the green as I type.

Among our 38 core positions (excluding cash and short-term bond ETF), nothing, other than our put options of course, is in the green so far this morning. The biggest losers are Dutch Bros, MP Materials, uranium miners, energy stocks and base metals miners.
Pulling from a post from last July, this one's timely:

"There's thinking, then there's thinking (over-thinking) when we're talking investing. The latter can be the result of living emotionally with the short-term fluctuations of markets. And, as you might imagine -- per Jesse Livermore's admonition to sit tight when you've done the macro work -- that (reacting to over-thinking) can result in consequentially negative (longer-term) outcomes.

With that in mind, here are two quotes from Will Durant's life work, The Complete Story of Civilization (I've made the personal commitment to read it start to finish [i.e. simply the reading of it (10k pages) may end up being my life's work]):

"Not to think unless we have to -- there is much to be said for this as the summation of wisdom."

"...when fear is overcome, curiosity and constructiveness are free, and man passes by natural impulse towards the understanding and embellishment of life."

Posted by Marty Mazorra at 7:48 AM