Well, alas, the big catch from my Montana fishing expedition turned out to be covid. Unfortunately, unlike Madison River rainbows, there's no catch and release with this one.

Thus, my voice simply won't have it when it comes to recording this week's economic and stock market snapshot video. I was, however, able to score our index and update our charts enough to develop some share-worthy assumptions.

With regard to the present state of general economic conditions, our proprietary index, dropping to -2.22, has officially crossed the threshold into recessionary conditions, albeit barely. 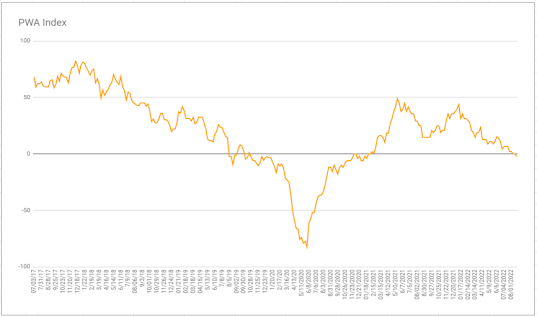 Retail sales and industrial production (month-on-month) both grew in July (although the retail sales number is nominally, not volume, based... I.e., inflation [not higher volume] explains the uptick):

However, there were sufficient negative inputs to slightly more than offset the pluses.
Housing starts, permits and homebuilder sentiment presently spell recession in the housing space:

The Baltic Dry Index says not good things about the state of the global economy (although it's welcome with regard to inflation):

And our Staples/Discretionary Stocks Ratio has that recessionary look (staples stocks flat year-to-date, discretionary stocks down 18%):

Our base case remains that a recession is very likely in the near-term offing, although a relatively mild one.
As for stocks:

Clearly the market has been trading on the weaker data, assuming it will translate to softer Fed policy. Should that indeed happen, or should the market have it right, then, clearly, earnings projections do not nearly discount the kind of economic weakening that would have the Fed do a 180 and begin a new easy-policy campaign.

If, on the other hand, the Fed, as several of its members suggest, continues to prioritize inflation risk in the face of weaker data, the market has it entirely wrong.

Sounds like the worst of both worlds for the bulls. In the former, earnings will sorely miss expectations. In the latter, the Fed will not backstop equities should a major selloff ensue at this juncture.

As for the technicals, while I was away the S&P hit our 4,300 bear market rally target.

Note below (white circle) that it also tested, and rejected, the 200-day moving average (the typical bear market phenomena I pointed out in a recent video):

As for momentum, the MACD looks to be rolling over from a mighty high position (yellow circle in panel 2), and the RSI is coming off of a notably overbought reading (white circle in panel 3).

As for the underlying positioning that we believe largely explains the recent rally, with regard to options dealer positioning, here's what the experts have to say:

Following Friday’s significant options expirations (OPEX), a large chunk of the options activity that has bolstered the run higher and subsequent tight ranges rolled off, leaving markets a bit more susceptible to the whims of underlying macro-type forces.

If markets were to roll over, the demand for hedges may be the factor that accelerates selling (i.e., market down –> put demand –> implied volatility rises –> liquidity providers sell stock to hedge short put…)

While the underlying options action offers less support right here for a further rally, I can't say the same with regard to futures speculators' positioning.

Meaning, should the index once again break higher, there stands to be some notable short-covering potential that'll serve to push it further beyond where our view of the fundamentals warrant.

As we've pointed out over the years, uber-bearishness often turns out to be uber-bullish. But when we look at other sentiment indicators, such as the put/call ratio, the AAII survey of individual investors, and the advisor sentiment reading from Investor Intelligence, it appears as though bullishness is presently back on the rise, which, ironically, can be bearish.

This week should be telling, as we'll get a good chunk of data along with a highly-anticipated speech by the Fed Chair on Friday.

Posted by Marty Mazorra at 3:05 PM