Morning Note: The Market's (maybe) Misinterpreting the Fed -- And -- "Nobody Wants to Work Anymore", a not-so historically-uncommon gripe...

As we've been stating for weeks, while our long-term structurally higher (than the past several decades) inflation thesis remains intact, the post-covid surge was/is in the process of peaking and rolling over -- although, ultimately, settling in at a level notably above the Fed's 2% target (in the absence of a deep, protracted recession, that is)...
Here's Bespoke Investment Group last weekend on the topic:

"Inflation related indicators continue to offer a bright spot after months of unabated upside momentum. Over the last three months, the number of inflation indicators showing negative momentum has been either equal to or greater than the number showing positive momentum. With headline CPI rising 9% and PPI running at 18.4%, though, current levels are nowhere near ‘normal’."

That "though, current levels are nowhere near normal" was reiterated by, ironically, the usually uber-dovish Fed governor, Neel Kashkari:

"Neel Kashkari, the president of the Federal Reserve Bank of Minneapolis, suggested on Friday that markets had gotten ahead of themselves in anticipating that the central bank — which has been raising interest rates swiftly this year — would soon begin to back off.

So, while the market was no doubt keyed last week on slowing inflation, and a relatively market-friendly J. Powell during Wednesday's presser, the notion that the coast is clear may be dangerously premature, if not entirely ill-conceived, at this juncture...

Speaking of the market, we've been pointing to extremes in things like short interest, mutual fund manager cash levels, and options dealer hedging -- positional phenomena that would lend itself to a potentially sizeable, yet, in the context of an ongoing bear market, short-lived rally.
Here's Bloomberg's macro analyst Cameron Crise echoing that sentiment, and reminding us that while it's all fine and good to consider historical precedent, today's setup has to be considered within the context of, among other things, today's monetary policy:

"There are times when positioning and sentiment are the only things that matter. Sometimes those represent squeezes, other times full-blown crisis. For now, we are still quite a ways away from the latter scenario. And while it is certainly interesting to point to extremes in positioning or a fund manager survey as the catalyst for a contrarian signal, be wary of relying too much on historical precedent. Consider what monetary policy was doing during prior extremes in 2001 and 2009 and compare it to today. That’s perhaps the best argument of all for any sentiment-driven stock-market bounce to be short-lived."

Bottom line, while we remain open to all possibilities, we simply can't check all (or enough of) the necessary boxes that would have us feeling net-good about the equity market's near-term prospects just yet.
Note: With regard to the current brouhaha over Speaker Pelosi's pending visit to Taiwan, suffice to say that present social and economic challenges facing Chinese leadership preclude them from committing an act of war, although the politics of the situation will no doubt have them nevertheless rattling their military sabers.
Asian equities struggled overnight, with 11 of the 16 markets we track closing lower.

Europe's notably off so far this morning, with all but 1 of the bourses we follow trading down as I type.

Among our 35 core positions (excluding options hedges, cash and short-term bond ETF), 9 -- led by carbon credits, Dutch Bros, oil services companies, gold and Albemarle -- are in the green so far this morning. The losers are being led lower by base metals miners, Sweden stocks, uranium miners, AT&T and industrial stocks.

As we've been noting for months, a concern that's been topping the list among business surveys galore has been the inability to find willing, qualified folks to fill what has been a record number of job openings. The common gripe being "nobody wants to work anymore!"
Well, apparently this sentiment isn't as historically-unique as we may be thinking:
"NOBODY WANTS TO WORK ANYMORE!" 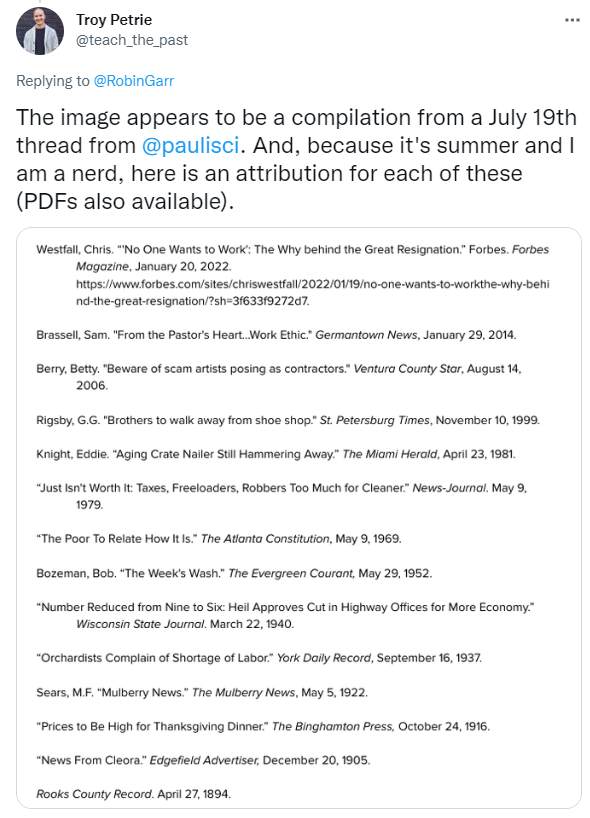 Posted by Marty Mazorra at 6:40 AM