History, and today's price action (except in the VIX), says CPI's coming in cool tomorrow (not a prediction btw)...

If you told me at the beginning of today's session that the VIX (tracks implied volatility in SP500 options contracts) was going to close up 9.51%, I would've guessed that stocks would take a significant hit on the session. I mean the two have carried a daily negative correlation coefficient this year of -0.8 (that's negative!).

With regard to the higher close, without the VIX I'd say it likely had to do with those shorts I alluded to this morning getting cold feet heading into tomorrow's CPI number, and, thus, rushing to cover... Like I said, if CPI comes in cool, the bears will suffer mightily come tomorrow.

Perhaps they saw the following from Bespoke Investment Group showing that of all the December CPI prints since 1999 only 4 came in hot: 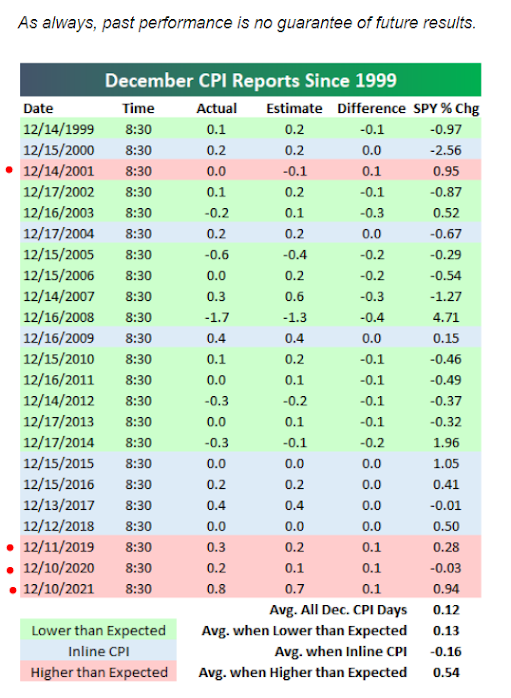 Searching for an explanation for the VIX/SP500 anomaly, I came across a Bloomberg article that gave it a try...

“There are plenty of events that could induce volatility over the coming days — CPI, FOMC, ECB,” said Steve Sosnick, chief strategist at Interactive Brokers. “So it’s not out of the question that some would utilize VIX as a hedge.”

“This week will be nuts,” said RBC Capital Markets’ strategist Amy Wu Silverman. “I have spoken with a number of clients who are more worried about the upside grab and continue to demand call options.”

“The outsize VIX move is a bit deceiving,” Murphy said. “It’s mostly due to the upward sloping curve and the focus on the CPI and FOMC events this week. VIX is up because time is passing but the options aren’t decaying like they normally do because CPI/FOMC is all that matters.”"

"Yet the VIX’s elation underlines the heightened caution among options traders of late. In every session last week, implied volatility spiked higher for S&P 500 options expiring on Tuesday when the CPI lands and Wednesday when the Fed decides, according to strategists at Deutsche Bank AG."

So, it's simply timing and lack of options decay due to this week's events, or it underlines heightened caution... Maybe a bit of both?

Regardless, we haven't had such a divergence since 1997, which suggests the latter is at least to some degree in play, while, to add fuel to today's upside fire, all that demand for call options (expensive ones today) likely had dealers buying shares/contracts to hedge their risk should CPI indeed come in soft, as the table above suggests it might.

To me, it was just a very odd day overall... Despite the big pop in the VIX, the action clearly denotes serious bullishness heading into CPI tomorrow and Powell on Wednesday, which, per our morning note, is an abrupt shift in sentiment vs last week's setup.

Suffice to say, this week will not be the least bit boring in markets...

Posted by Marty Mazorra at 2:35 PM