Lots on my mind as we close out a telling 2022... Clients and regular readers know that in our view we are living the early stages of what we'll call a structural regime change... In essence, the world has crossed the threshold that leaves behind a 4-decade long "capital-friendly" regime, which -- as capital-friendly regimes historically do -- culminated in extreme (and politically unsustainable) wealth and income inequality, and enters a new "labor-friendly (read populism)" regime.
As this reality evolves, many challenges will emerge, persist (divisiveness -- both intra and inter-nationally -- is a hallmark of the populist ethos), and ring downright depressing to many... But, make no mistake, it comes rich with attractive macro investing opportunities.
Think of it this way, in a world where political careers hinge, more than ever, on the "protection" of the rank and file, in the manner more-or-less defined by the rank and file, and on the "correcting," or rebalancing, of history's most extreme wealth and income inequality, an investment focus on being where governments are focusing their spending will be key -- now more than ever -- to long-term investment success... And when we fully understand the regime we're in, anticipating where governments' attention will be placed becomes something far less than rocket science... The aggressive global push toward renewable energy and the literally trillions allocated to it in the years to come is a prime example!

Now, let me be clear, when I suggest that understanding where the flow of spending will point, and acting on it, won't be rocket science in the years to come, I'm implying -- incorrectly I believe in the majority of cases -- that the investor, acting as an investor, can assume a dispassionate posture when it comes to allocating assets...
What I'm getting at comes from my frequent interactions with investors... I find over and over again that folks tend to confuse how they believe things ought to be, with how markets ought to react... That is, one's, for example, political ideology, can absolutely skew one's view of the investment environment... Meaning, when their party's in power, they tend to take on an optimistic feel about the world, and about their investment prospects... And, conversely, when the "opposing" party takes over they tend to see the world, and their investment prospects, in a most gloomy context.

I recall, a number of years ago, a friend pulling all of his money out of the stock market when a new administration took over... He was 100% convinced that they were going to burn the house down! Well, as it turned out, the ensuing bull market was history's longest and largest... Of course the extent to which the administration at the time deserves credit is open for debate, but, clearly, the macro setup and the constraints on government were aligned in a manner that made a massive, protracted bull market in stocks a high probability event -- regardless of the party in power.
Yes, had my friend's candidate won, he would've stayed fully invested, would've significantly grown his wealth, and of course would've given full credit to his favored side of the aisle... I.e., he would've felt very pleased with his portfolio, although, in reality, he, frankly, would've remained for-the-most-part clueless with regard to what truly made it all happen...
Of course all would not have to be lost for the likes of my friend... In fact, I might argue that, in the end, he was offered the kind of real life investment experience (lesson) that, if he embraced it -- if it inspired him to transcend his biases and see the world for what it is, and its inherent investment opportunities for what they are (a tall, yet critical, order indeed!) -- he'd go forward with an absolutely huge investment edge.

A more recent case in point is China's rapid shift away from its "Zero-Covid" policy... The following is my side of two discussions on the topic; both occurring on November 27th.
The first being my response to a news article a friend forwarded to me on the topic:

”…after 2+ years, the Chinese are at their breaking point. These are being called the largest protests in China since Tiananmen Square in 1989.

And that did not end well for the protestors when (literally) the communist government rolled tanks on unarmed protestors.

But if you think the CCP is going to relent on zero-COVID, and the population is going to say "deal," and everyone will return to the iPhone factory for the 18-hour shift with a promise of an extra cup of rice and back-pay, you're mistaken.

They have bigger ideas ...“

1) No doubt the Chinese govt anticipated a big spike in covid cases as they begin to exit zero-covid.

2) Lockdowns will be shorter duration, done with minimal fanfare, and more concentrated in terms of the real estate covered (all playing out).

4) The dissension will actually inspire the govt to continue opening up and dealing with the medical ramifications.

5) To offset the economic consequences of the increase in targeted lockdowns, stimulus will be continually brought to bear.

Whether or not, as I imply above, the push away from zero-covid continues in the short run amid the latest spike in cases, I hold zero doubt that zero-covid will gradually become a thing of the past over the next year or two...

Meanwhile, the political incentive to nurse their economy, and their markets, back to health is huge going forward.

The second being a reply to a comment regarding one of our blog posts:

Thanks! And, yes, you're voicing a legitimate, and what is ultimately a growingly consensus view on China... And, even before the latest turmoil, companies have been, albeit quietly, diversifying their production away from China (although not entirely)... Apple moving 5% to India... Vietnam (a recent addition to our core), as well as other destinations, look to be chief beneficiaries (not a new story for Vietnam)...

De-globalization is a main factor in our overall investment thesis, and view on inflation, going forward...

The big question going forward, however, is, will this truly be a 21st-Century story that culminates in a Tiananmen Square-like outcome, or will the globally-spreading rise in populism ultimately win the day in China as well... Considering Xi's commercial ambitions (globally), and, therefore, constraints, I don't know that another Tiananmen Square event is a given right here...

From a purely investment standpoint, you might be surprised (I emphasize "might be") over the next year with regard to Chinese equities... (not a recommendation!)

Again, it's so easy to confuse what one believes about the platform, the preferences, etc., of a particular party, or individual politician, with the constraints that said party/politician faces in today's world.

Believe me folks, the constraints -- not the preferences -- are absolutely what investors should (but all too often do not) focus on!

Here's a look at the MSCI China Equity Index over the past 30 trading days (note the green X on 11/27; the date of the above-referenced conversations):

Yes, those protests inspired the Chinese government to begin aggressively "freeing" the people (from Zero-Covid)...

And here's from China strategist, Shanghai Macro, on December 26th: 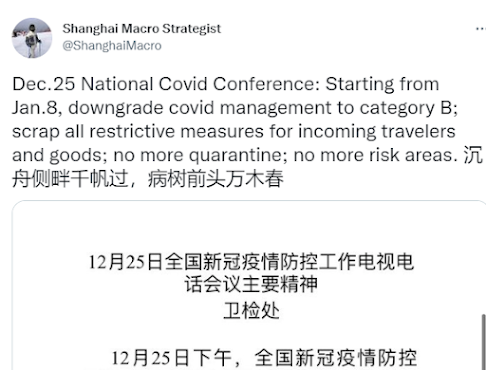 Brazil presently serves as yet another case in point... As you may know, we're bullish Latin America going forward -- (if you like commodities over the next few years, if you believe China is going to invest aggressively in growth going forward, and if you understand the pressure on the commodities complex from that "aggressive" push to renewable energy, you gotta love Latin America!) -- butbutbut Brazil just elected a hard-core big-government populist to run the country (a sign of the times)!

Yep, they did, and, yep, Lula's platform exemplifies what I just wrote... However, he's a politician, and, like all politicians, he -- being desperate to succeed politically -- is constrained by the economic, and financial market, reality he's walking into... Which, is, in many ways, a beautiful setup for him -- one that the last thing in the world he wants to do is screw up!

And, like I suggested above, understanding political constraints and transcending one's biases gives one a serious edge when it comes to allocating assets in a global macro sense.

Here's a 1-month chart of EWZ (the ETF that tracks the MSCI Brazil Equity Index)... I placed a red arrow alongside the market's reaction to Lula's recent appointment of a "leftist economist" to lead Brazil's development bank... I also placed a green X right where we increased our position in EWZ:

Despite a year of political turmoil for Brazil, its equity market remains one of the few delivering positive returns to this point* in 2022 (*still a few trading days left and the very short-term setup is politically precarious).
In Part 4 we'll dig deeper into the whys and the hows of where we believe the best opportunities will reside in the years ahead...

Posted by Marty Mazorra at 7:23 AM