Morning Note: The Dollar is Key -- AND -- The Speculative Mood

Dow futures -- responding to the President's push back against the stimulus bill -- were at one point down ~200 points overnight.

This morning, however, is seeing the opposite, with the Dow up triple digits as I type.

The headline says the market's bouncing back despite the threat to the stimulus bill. While that's of course true by definition, it leaves out the likely catalyst for this morning's rally.

And, no, it's not the fact that weekly jobless claims -- still north of 800k -- came in lower than expected.

I'm thinking we can credit much of this morning's optimism to weakness in the dollar (strength in the euro and the pound) in response to news that a Brexit trade deal is close at hand.

"Recall also in last week's video that, while I'm generally bearish on the dollar longer-term, the technicals have been pointing to a bottom, and I thus warned of a bounce that would "play havoc with stocks." We'll see if today isn't the beginning of something. Although a Brexit trade deal would I suspect quell the dollar's upside, at least momentarily."

Well, we've seen a bit of a bounce since last Tuesday's video, and it did play a bit of havoc with stocks.

White = the US Dollar Index, Blue = the Dow (note the near perfect negative correlation), through yesterday: 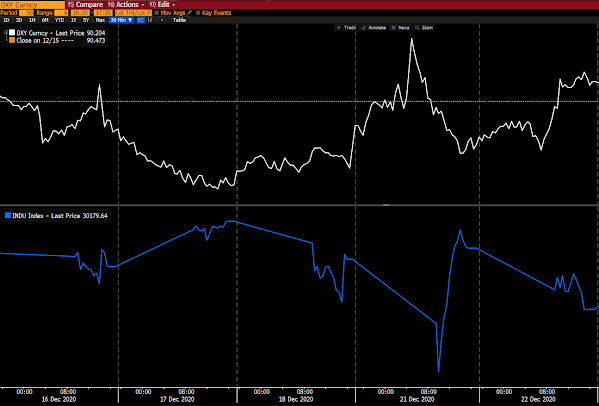 And here's adding on this morning: 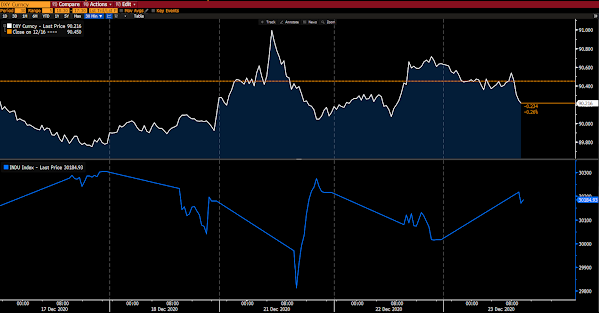 Yes! The dollar will be key going forward...

Asian equities rallied overnight, with all but 2 of the 16 markets we track closing higher.

Same for Europe this morning, with all but 3 of the 19 bourses we track presently in the green.

The 10-year treasury's down (yield's up) and per the above the dollar's taking a hit this morning, down 0.37%.

In that our core mix expresses our longer-term weak-dollar thesis, our core portfolio, up 0.79%, is besting the overall stock market so far this morning.

Leading the way is energy, banks, silver, financials and base metals. Our only decliners on the morning are tech and Verizon.

We indeed see opportunities to exploit in a world where the central bank has managed its way into the proverbial corner; the narrowness of the path out (money printing, interest rate and dollar suppression) gives us unusual clarity (amid what are certain to be unusually volatile times) in terms of where probabilities lie sector by sector.

That said, sentiment, valuations, IPO fever, etc., (not to mention a corporate credit bubble) scream bubbly conditions that demand that we hedge in a manner that would mitigate the damage from a major market blowup.

I.e., the mood is speculative, to put it mildly:

"It is another feature of the speculative mood that, as time passes, the tendency to look beyond the simple fact of increasing values to the reasons on which it depends greatly diminishes. And there is no reason why anyone should do so as long as the supply of people who buy with the expectation of selling at a profit continues to be augmented at a sufficiently rapid rate to keep prices rising."

Have a nice day!
Marty

Posted by Marty Mazorra at 8:20 AM